Our attacker was a Kia, a huge more than chickensized parrot which was last seen stabbing furiously with its eagle like beak on our skylight.  As we went to bed Keith adjusted the ventilation: fly screens to keep biters out, skylight open enough to let air in but keep parrots out.

Up early and left before breakfast to catch the view of views at Matheson Lake, capturing a reflection of the back of Mount Cook and Mount Tasman in the lake. We were there before 7. It paid off.

Beautiful. Typically though I was more interested in the eels. They grow to be 25kg – pretty frightening to come across. But maybe more frightening is the story we read in today’s papers of a Mexican child who weighs 28kg at 10 months.  The eels take a longer view- read below – essentially they live to be 100 or so then die after major procreation activities. 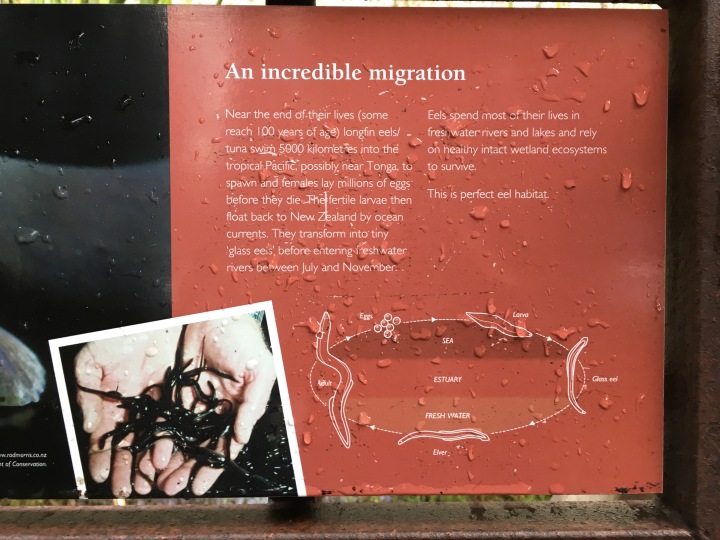 Other interesting items round the lake:

Examples of Maori use for plants. 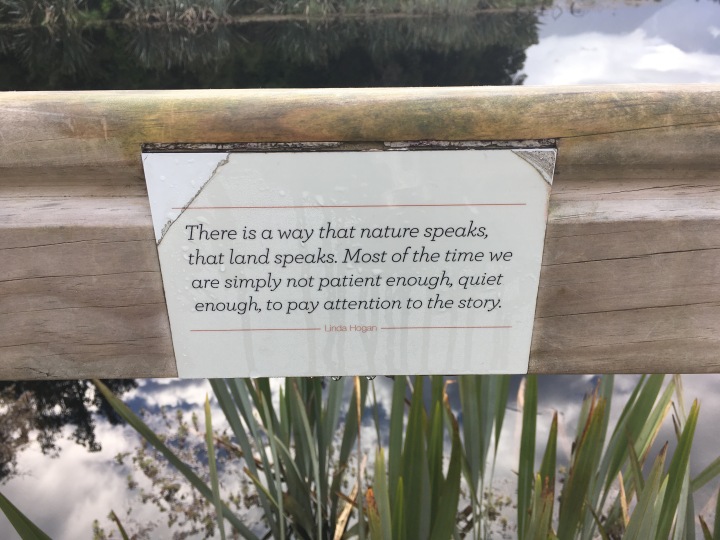 And so to breakfast:

Just beyond the table you can see the reeds of the sewage treatment plant. No smell. Delicious toasted bagel and cream cheese.

Hands up those of you who thought that Fox’s Glacier Mints were simply mints made by the Fox  family?  Well they probably are, but there is also a glacier called Fox Glacier. And it’s a minty blue colour when you get close.

Here you can see it in the distance….. the next two are close ups. Look how tiny the vehicles look on the second picture (the next one now): 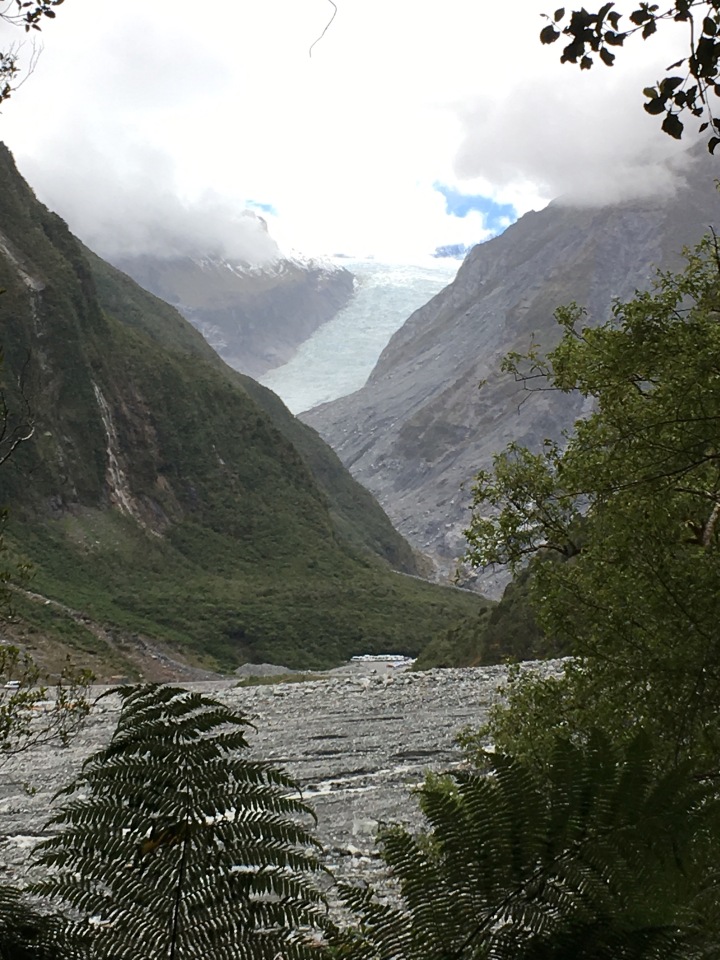 En route we found Gollum climbing into the lower branches of a tree:

And one final picture  of Fox Glacier for good measure:

Next stop: Franz Josef glacier slightly higher up the West Coast, along the western edge of the Southern Alps.

The walk here was much more demanding, past huge waterfalls and exhausted tourists, too weak to complete their journey.

The weather changes rapidly here. The ‘four seasons in one day’ remit does hold true. It’s sensible to take notice as the walk is at least 45 mins each way.

Not everyone listens to the advice: 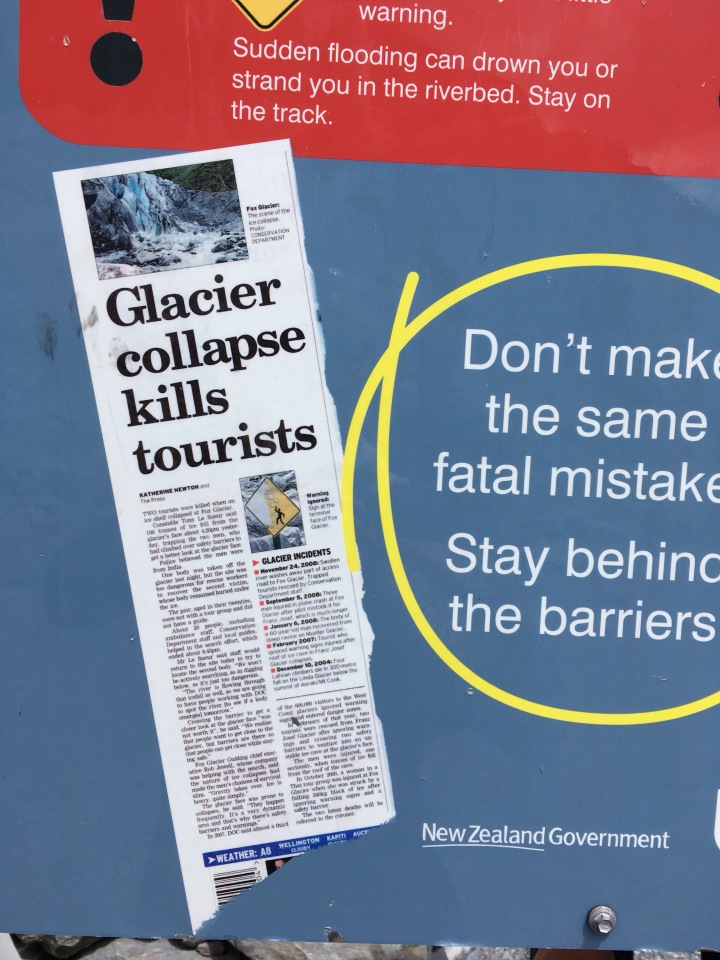 Even the department of conservation (DOC) can be taken unawares:

It was really worth the walk though: 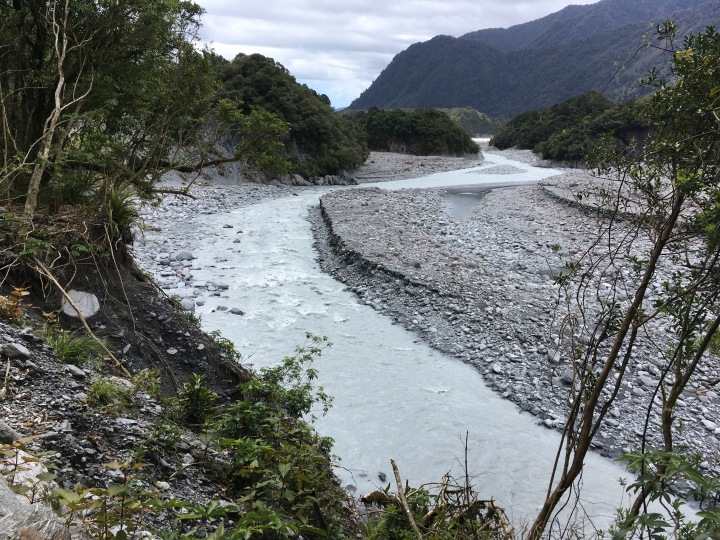 River flowing from glacier. Slightly milky appearance due to ground down pebbles etc which all settle down eventually to leave a clear blue green water we saw around Banks peninsula 2 weeks ago.

Health and safety quite strong. Drones are used extensively by certain groups of tourists. They fly them so low that people could easily get injured. Here they are banned as they can interfere with helicopter control.

And finally as our days are slightly more numbered we realise we have to drive further today to Hokitika. We debate whether to shower before or after emptying Grey and, horror, black water. I proffer the suggestion we should empty said  reservoirs first, shower later.

Which is just as well as my companion, charged with emptying black water as he was the one who ‘availed himself’, managed to flush the cassette through and spray me with what would politely be called slurry! How we laughed!!!!

Which reminds me of a cyclist we saw pushing his bike on the verge yesterday. Compassionate to the nth degree we stopped and asked if we could help. To which the tiny, wizened, black clothed, virtually edentulous man (or maybe an orc or sprite) replies he was ‘good as gold, good as gold, mate’ adding swiftly – ‘ unless you  smoke of course. ….’ Reminding me then of a person (young man) arrested on suspicion of driving whilst under the influence and needing blood samples taken. I was police surgeon that night. It was around 1998.

When asked how things were going he replied  that he was ‘sweet as a nut, sweet as a nut, mate’. No Particular point to that paragraph. Simply an observation.
Today’s tally:

2 thoughts on “Survived the night, view of views and more….including a potential new tally..”