After yesterday’s frenzied attack on our van at Fox Glacier, we now have the technology to reveal his face: 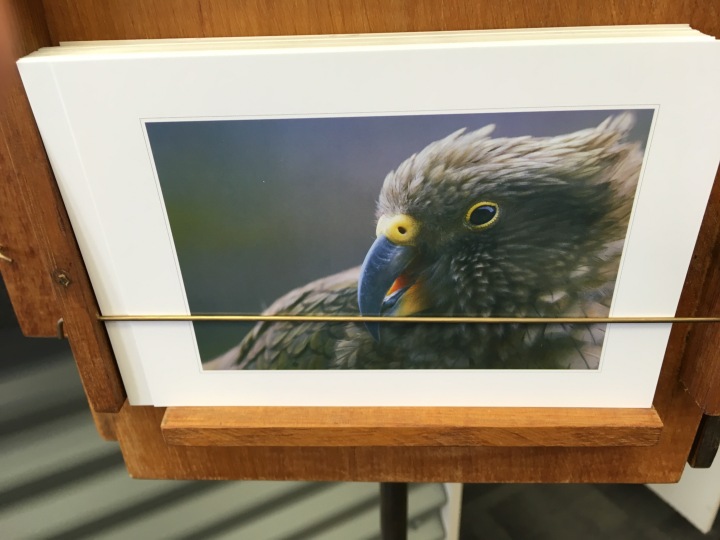 Quite terrifying even in repose, but caught in flagrante delicto, as it were (using the non colloquial meaning)(incidentally, what a delight to find I can italicise too! Undoubtedly more of that to come.) as when viewed from below, my case a mere 36 hours ago, is scarring, deeply scarring.

Lunch pause: hard life but someone’s got to do it. Just outside Hokitika.

There were individual whitebaiters here too- catching the penultimate rising tide of the 2017 whitebait season. 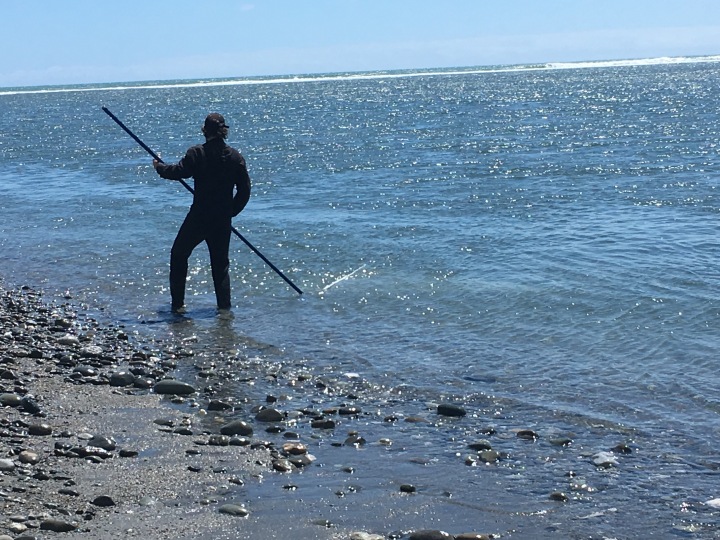 Today we visited Hokitika, without any particular expectations. They were greatly exceeded. It’s a quiet town with a lovely feel. And a cinema screening six different films this week including some live streaming from The Globe. 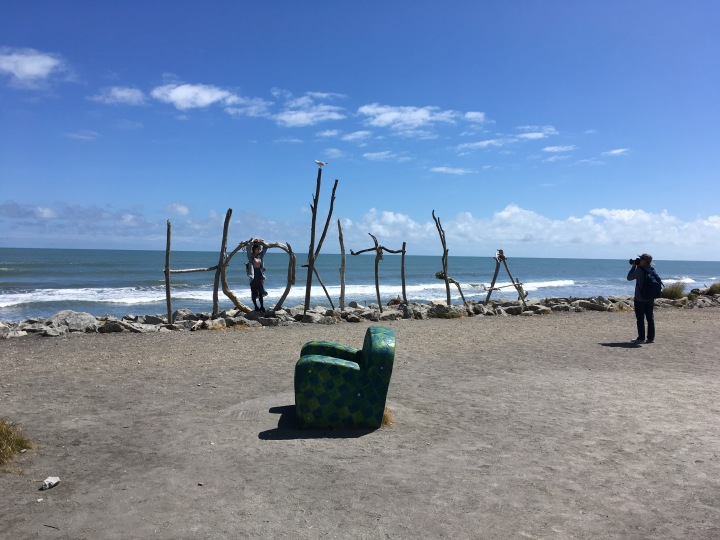 Site of a gold rush in the 1860s it was said to grow at a rate faster than San Francisco or Melbourne. Fortunately Hokitika knew when to stop. The resident population was 319 in 2013. We met some of the population today.

Doing a walking tour of the town (we’ve so done glaciers and mountains recently….) we passed by the old customs house on the wharf and suddenly were inside with the knit and natter group. 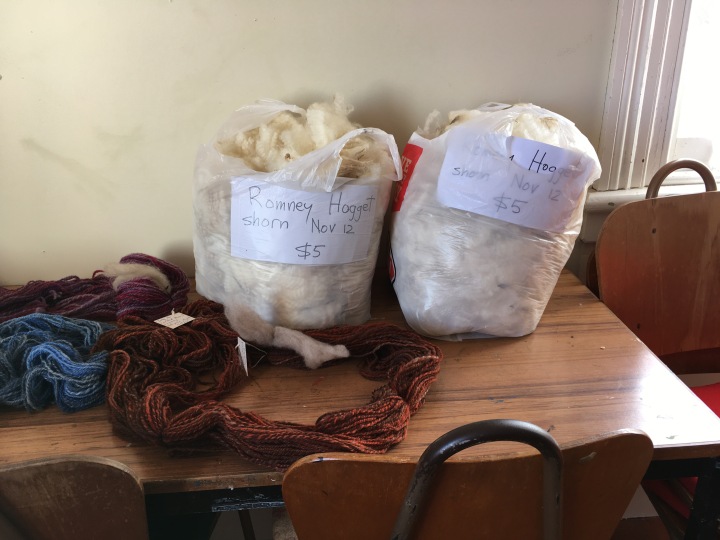 Some of the ladies shear their own sheep – sadly slow to sell the wool I thought until I realised that Nov 12 refers not to five years ago but rather to two days ago. The wool was clean soft and smelt wonderful. Lanolin I suspect.

They meet twice a month. One morning session and one evening to accommodate those at work. In addition to knitting there are also spinners, felters, weavers and there was a great communal project underway too.

Marge (left) and Jean. Marge’s family left the northwest of Skye in 1863, travelled to Liverpool (already a huge journey) then took the boat to NZ.  She’s grateful to them for making that decision, and also reflects how difficult conditions must have been to make travelling to the other side of the world the preferred option. (She asked us to say hello to the man at the wonderful fox cafe when we passed by. Remember this)

The knit and natter group:

Jean (dark blue lhs) is the lady who brought the freshly shorn sheeps’ wool (a tongue twister). The homemade cakes and biscuits looked and smelled  amazing but of course they were not for us.

Happy with our chat and learning more of the local history (lots of information about how the port functioned, the number of wrecks caused by the massive sandbar – and also local places of interest) we investigated the wharf and found this:

Perfect timing, perfect coffee and superb cheese scones with fresh butter on Sunset Point from I think the only Mobile outlet I’ve seen during the visit so far. (The blackberry muffins looked superb too).

The Three Little Birds is not, as I thought, run by a group of three women. It’s run by Jeanna who gave up her regular work in a cafe to be able to fit Work round her family life. The little birds are her three sons: 15, 3, 1.

I had a picture of Jeanna but it failed.

Here is a close up of her sign and my finger, the birds representing the sons. If I were writing her up on trip advisor she’d be getting five stars.

Next stop the vinyl fashion shop. 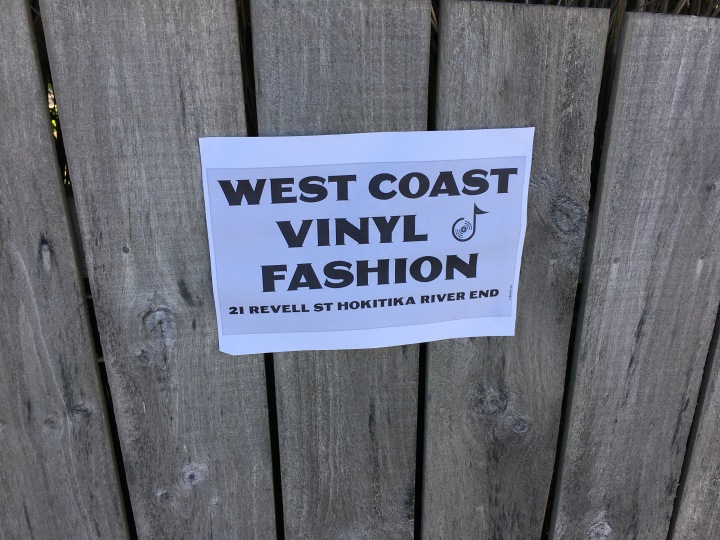 My companion wonders ‘what they get up to round here’ and squashed (?quashed?) my old fashioned look with a reminder of my cat woman suit (purchased, with whip and mask, for last year’s works Christmas party, but never worn. That’s another story. ). Still…… I protested, now somewhat feebly.

The vinyl fashion shop does what it says on the poster. Sells vinyl and fashions.

The trip from Hokitika north featured stunning coastline and virgin forest. The multiple rivers on each day’s trips are frequently crossed by single lane bridges, priority being clearly defined. Today one of those bridges, which was essentially wood,  carried the railway line too. Three ways to misinterpret other peoples hand and light communications and signals. Ah well…

We’ve arrived early at the campsite, The fourth in a queue of campervans, and more turning in behind. But we are in punakaiki, part of the Paparoa national park, and site of the island-wide reknowned pancake rocks and blow holes. Sorry. ….. Pancake Rocks and Blowholes. That’s better. Pictures later.

How is life In a 7m camper-van?Well it’s good to be short – the bed is. Getting onto said bed is a totally different matter though and as such I try my hardest to ensure I will not need to rise til the next morning. 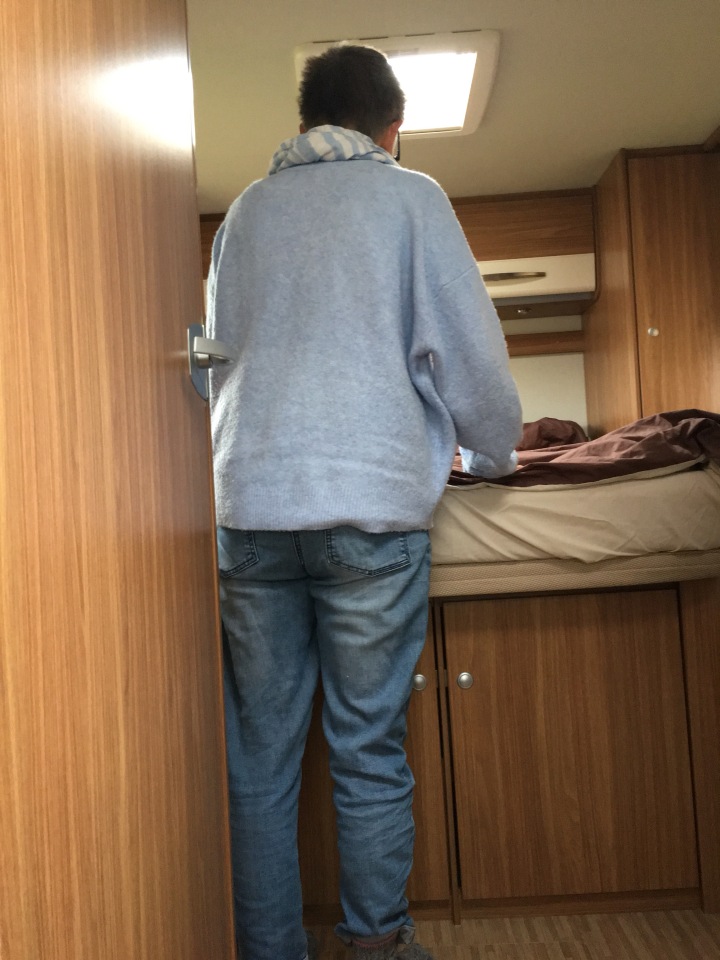 The top of the mattress is at hip level. There is no step. I have three choices.

Run and hurl myself at it, grabbing pitifully at the sheet and hope it’s tucked in properly to break my fall. 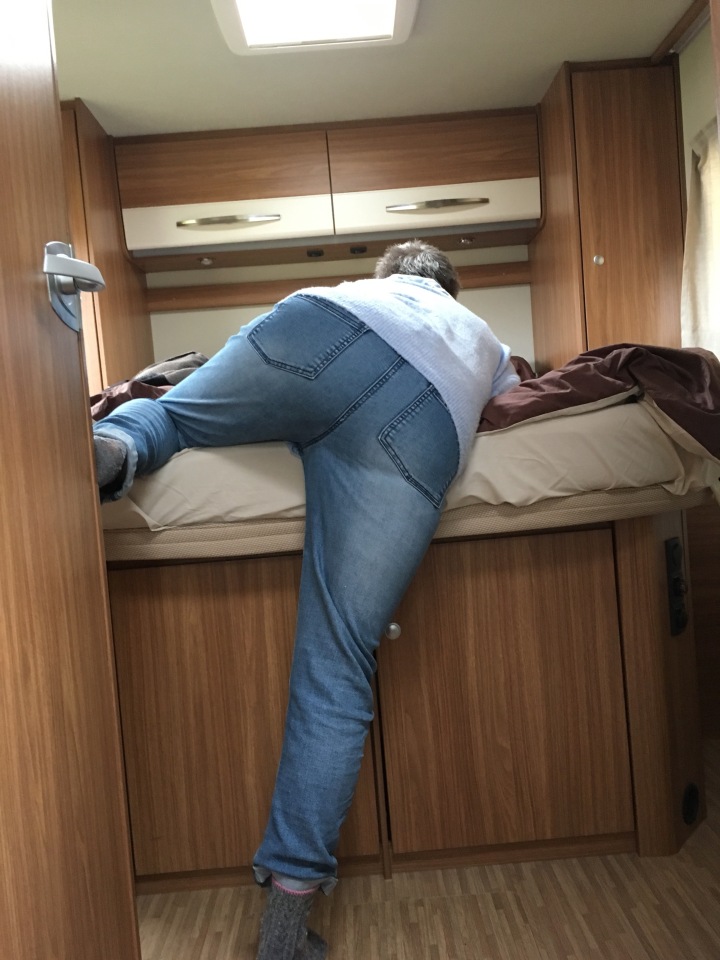 Sort of jump and lurch forward at the same time struggling to get one knee on to the bed and then scrabble to get the other one up then manoeuvre from the all four position (which incidentally is the one many men adopt when asked to get into the examination  couch, and never fails to amaze me, particularly when I have asked them to ‘ lie on your back with your feet at this end and your head at this end, by the wall’. ) I digress. Then move from the all four position to one suitable for sleep.

System 3. Stand and wait for husband to appear (this one does not work if he is already in bed and (feigning) sleep) then ask husband to help you up at which point he may put a hand under one buttock, maybe both, or possibly enter into a detailed discussion about the physics and geometry of someone my build mounting said bed. We are no further in the process but know all the factors that need consideration.

System 4. Go to side of bed, raise left leg and wedge against wall using this to elevate body. Then scrabble again.

Which explains why I don’t like to get up in the night. Not the cold, or a desire to avoid using the in-house facilities, or a fear of a possum bite if I  go outside. It’s the monumental effort of getting back in.

Back to hotitika – they lady at the knit and natter told us there were many seats around the town. I think my other half took this as an aspersion and judgement about our age and reassured her we wouldn’t need them. She was referring to the art seating trail. Here are some examples. 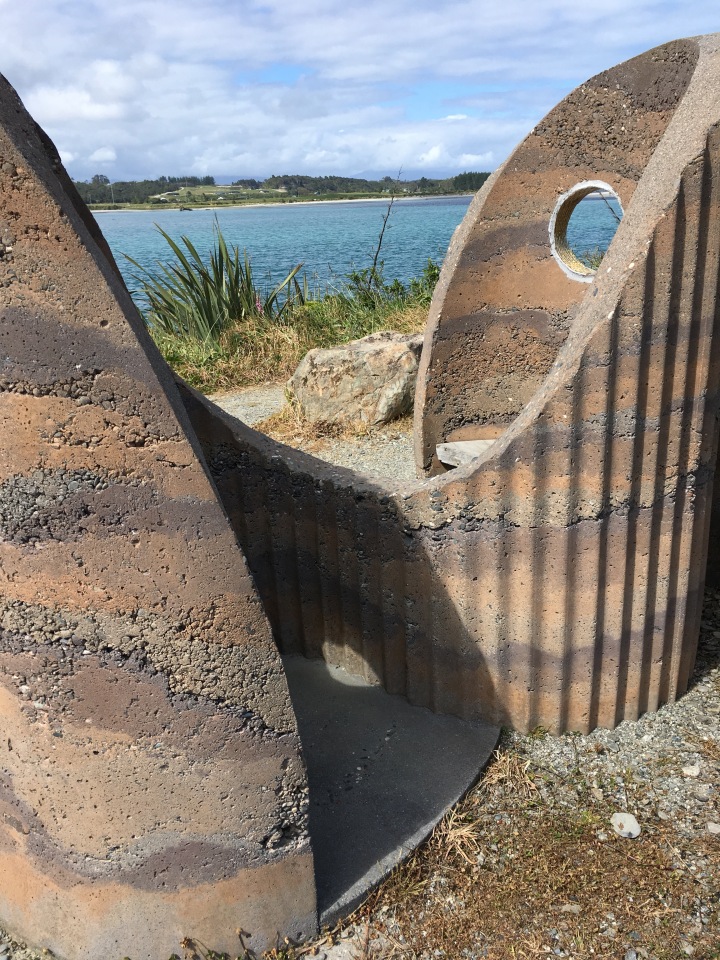 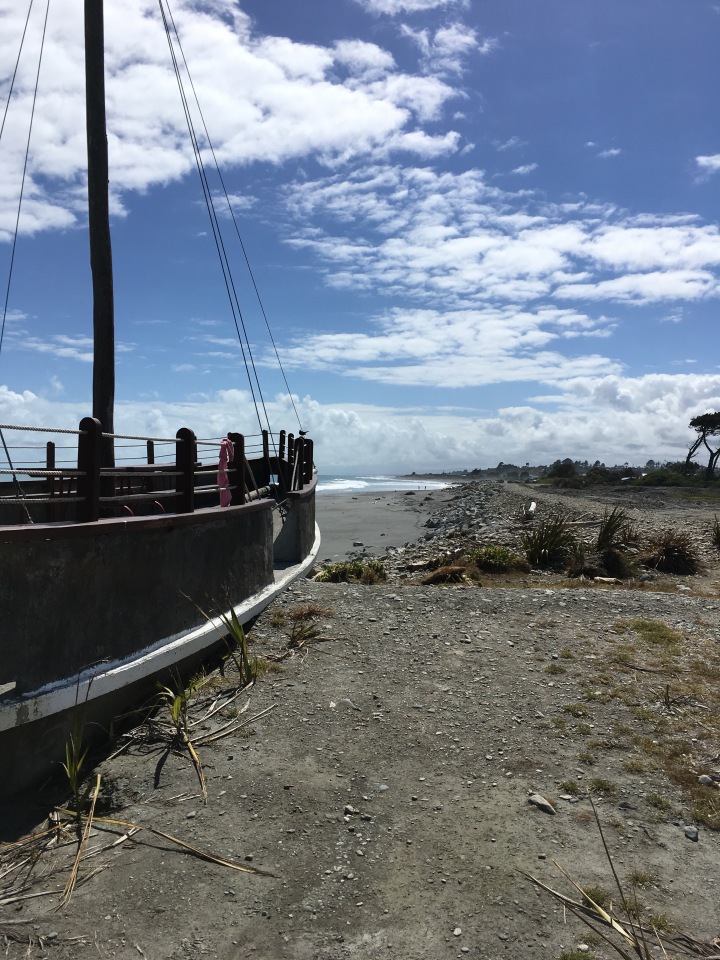 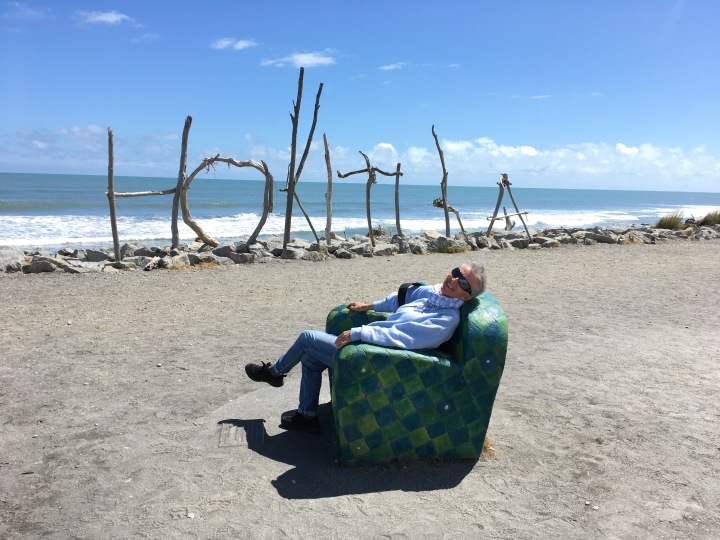 In other news, Keith ‘got a hit’ today as recommended 20 days ago by the man at Moeraki. I’m sure you’ll agree it suits him well. These are shots of him making sure. 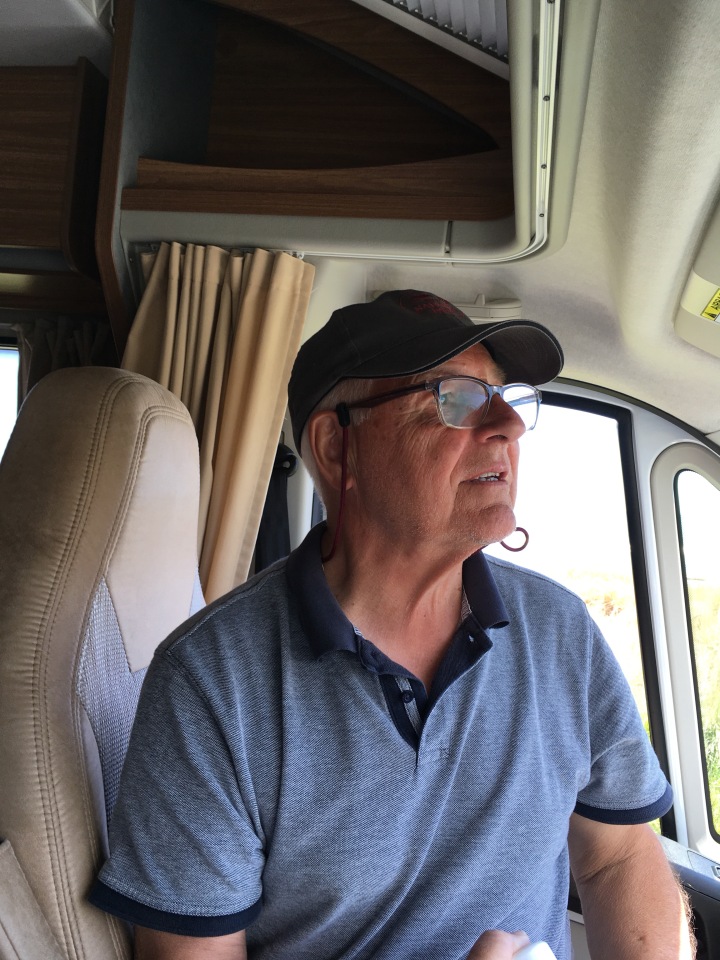 And now I know why I’m finding it difficult to find meat-free meals…. 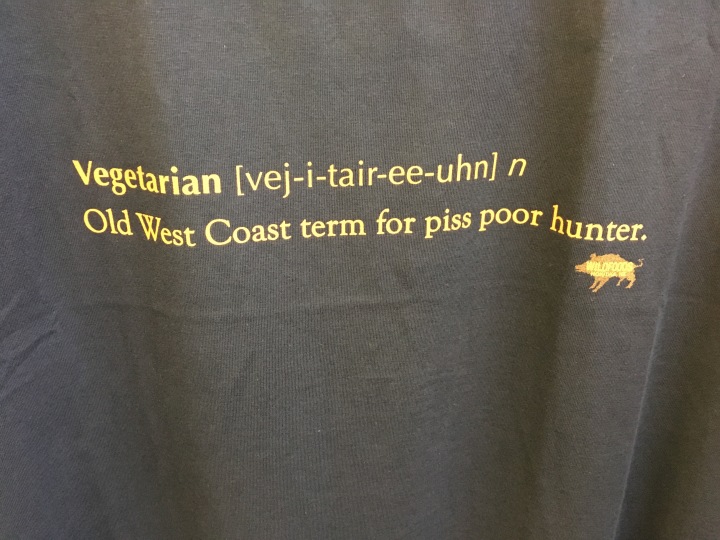 That’s it for tonight folks.

Endangered species: coming out of our ears. Kiwis today.

Tantrums: too laid back to count

New words: the verb to gazetteer