We have a choice of routes today. Around 41 miles and not too hilly or around 59 miles and fairly hilly, but more picturesque and quiet. My sensible side (k) thinks we should do the former so …..

But first- Moffat. Through it runs the river Annan. It nestles in a valley surrounded by low hills. The view from the wood panelled breakfast room was lovely. But this is maybe more interesting – a snap taken as we walked out around 9.30 last  night (girls still sitting in the park by the way). 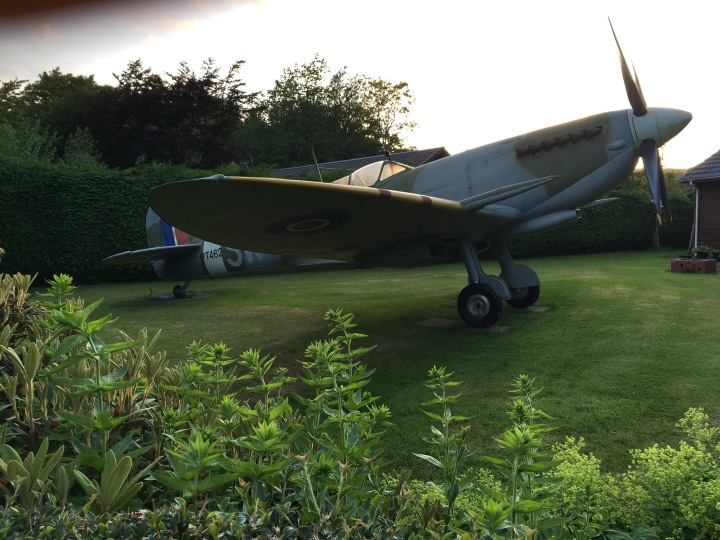 Just what every cul de sac of bungalows contains nowadays. This is in recognition of Air Chief Marshall  Hugh Dowding, AOC RAF  Fighter Command during the Battle of Britain (1882-1970, born in Moffat, nickname Stuffie). 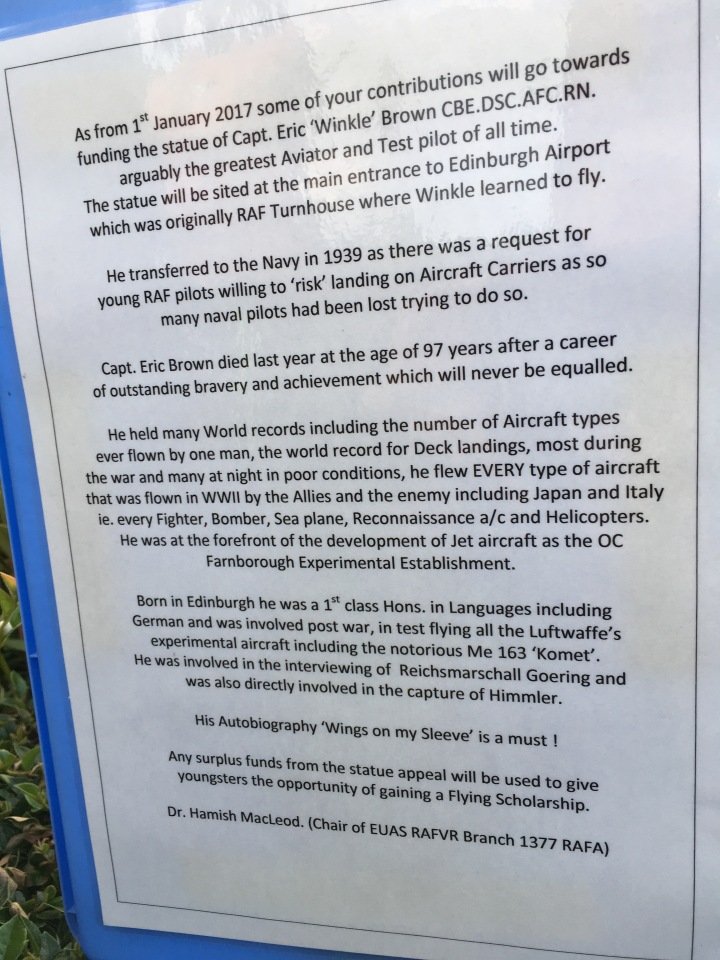 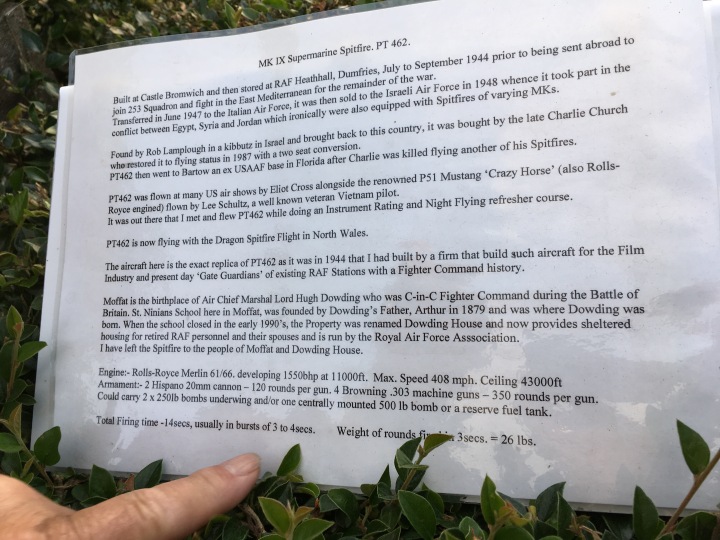 An excellent breakfast and leisurely start to the day at 08.20.

Passing the motorway yesterday we saw a sign: ‘yellow warning: heavy rain forecast’. Keith, a sometime optimist, suggested that they were possibly just testing the sign.

The heavens were heavy  leading us both to don our identical ladies size 14 waterproof trousers. It’s a mystery how they should fit us both so well.

Technical time: clothes for daily wear. Shorts (lots of air, don’t get so wet when raining), long sleeved top (made of merino wool) cool when its hot warm when it’s not (the old Viyella advert) and snug for neck (merino wool) – protects from sun and wind, absorbs sweat and tea dribbles. Long socks – help calves, protect from sun, keeps one presentable, can be rolled down. I’ve not washed my merino items since we started 13 days ago! They promised they wouldn’t smell and they don’t. (I do have a spare in case.) 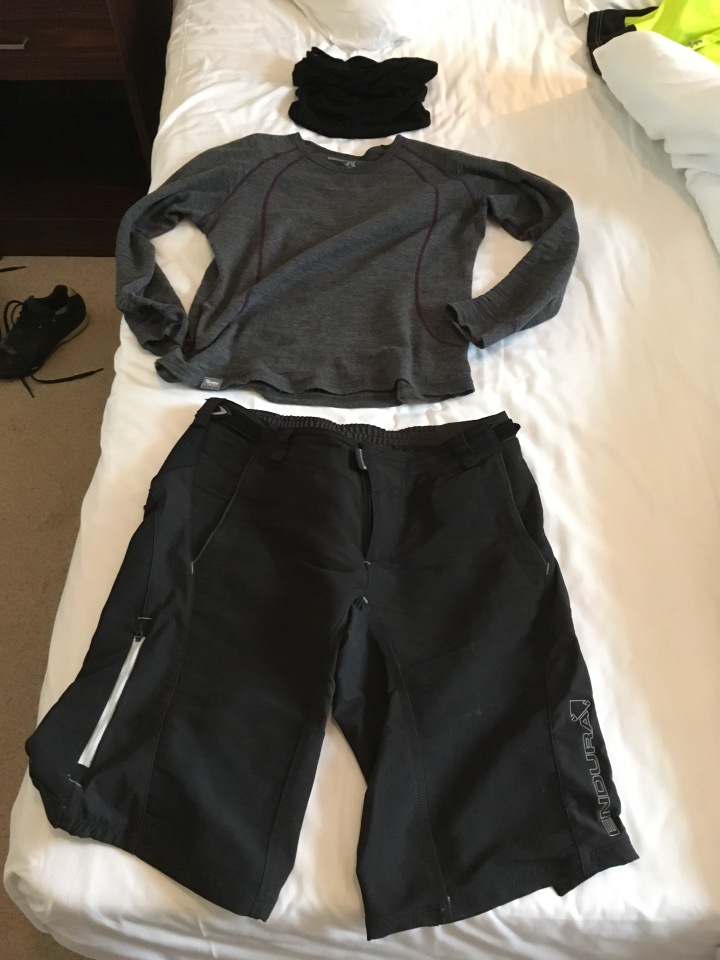 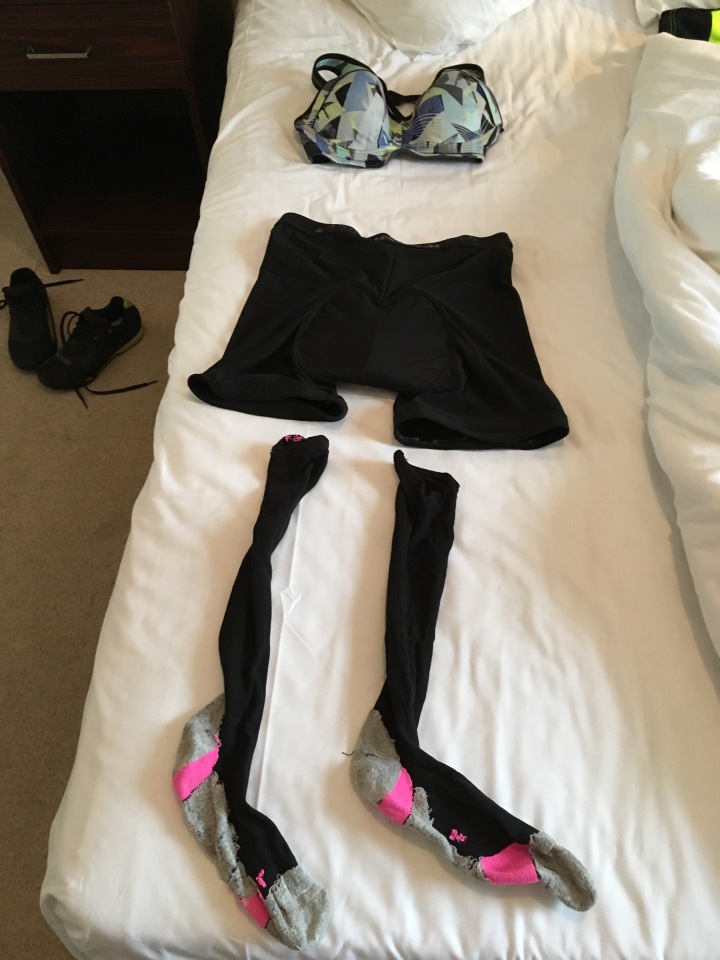 And underneath the aforementioned ‘smalls’, a good supportive rather than compressive sports bra (the lanes are very bumpy).

It cleared up. We stopped at a business which like a Tardis was absolutely massive inside – a bar at the front with leather settees, a wood burning stove and stacks of dvds, a transport cafe at the back with a huge tv screen and dismaying array of cardiac arrest breakfasts on sale and, to one side, a regular take your mum for a cuppa cafe.

Keith sat at a picnic table so large I thought we’d wandered into Goldilocks  and the Three Bears. Then to one side a man wearing black stockings and a velvet jockey cap started playing a bugle. Maybe we were in Alice in Wonderland?  Hallucinating again? The table was real. The buglers were part of the state opening of parliament, the pageantry of which was quite overwhelming.

Travelling through the country we’ve seen probably hundreds of estates, beautifully maintained. Who earns enough to support these? 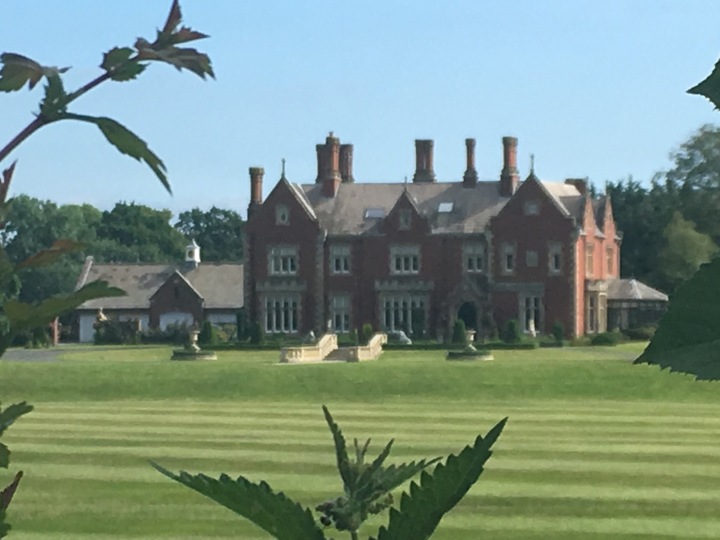 And many farms, but this is the first of these: 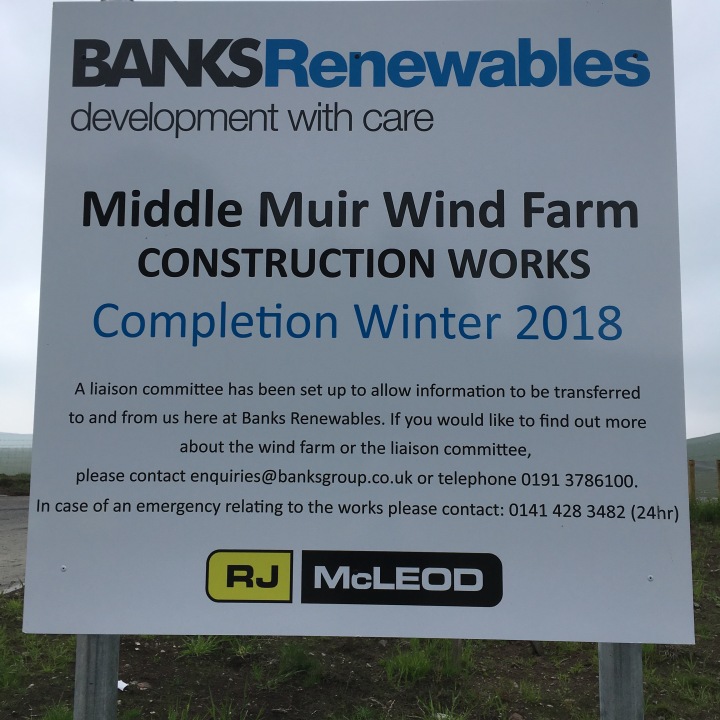 Frankly the ground is so poor just here that ground use like this probably makes sense.

Having cycled steadily uphill for five, yes FIVE, miles at the start of the day the rest was fairly straightforward. Lesmehagow, a village outside Glasgow, is obviously up and coming, or soon to be, so that the cAfe we stopped at, flanked by two olive  trees, selling pesto this and that , good coffees and with a lovely library area, nestled amongst fish and chip and betting shops, will eventually develop a roaring trade. 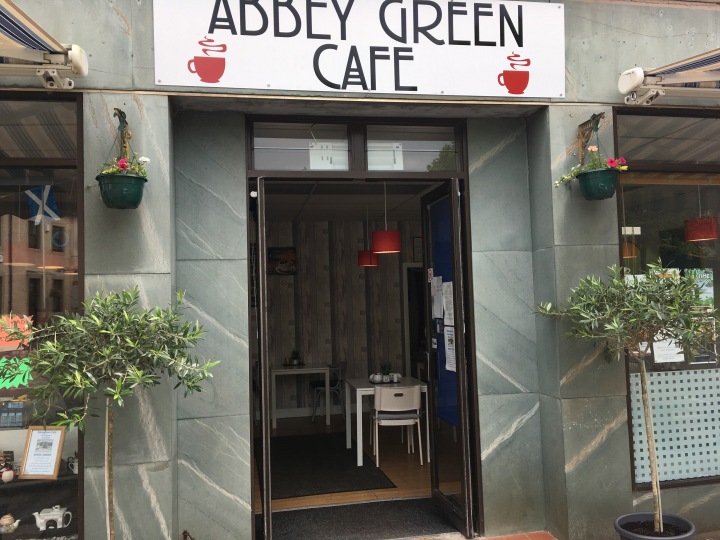 A passer by described Keith as mr Mahogany!

The phone box had no windows but, unusually for our journey so far,  a phone. 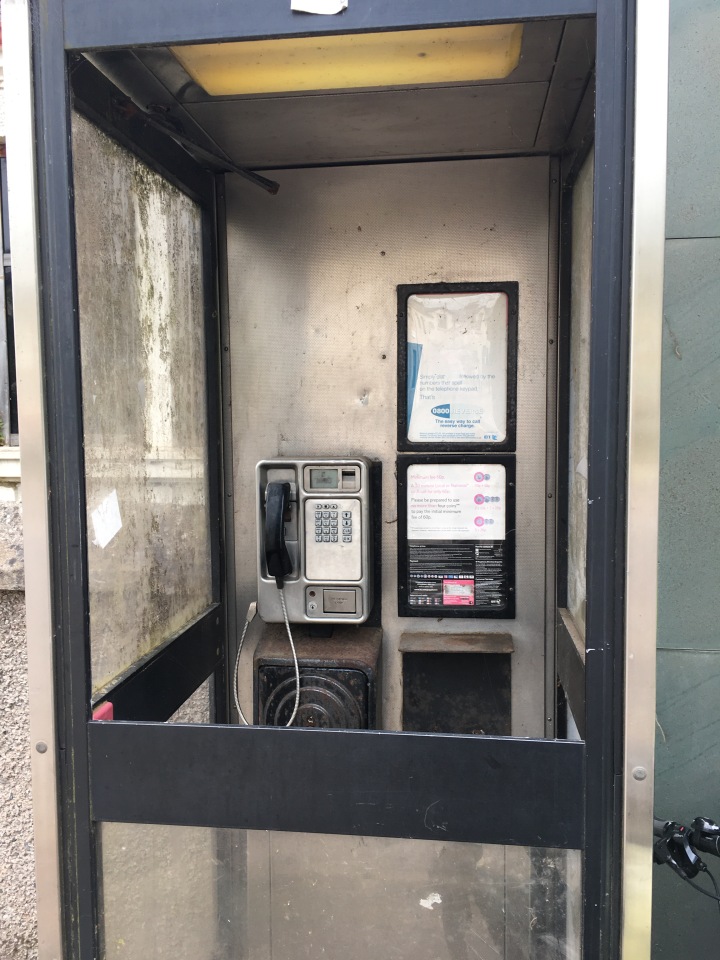 And meanwhile the quest to support us, or otherwise, on this epic trip continued with the thinly disguised hobbits pacing the road opposite …… 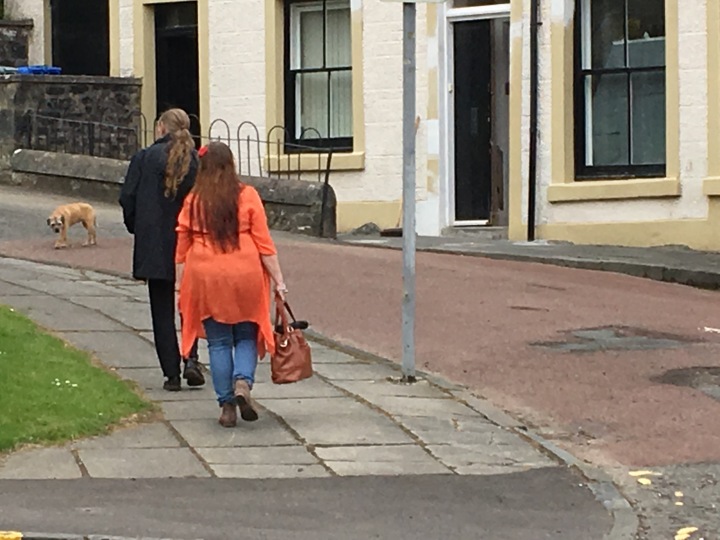 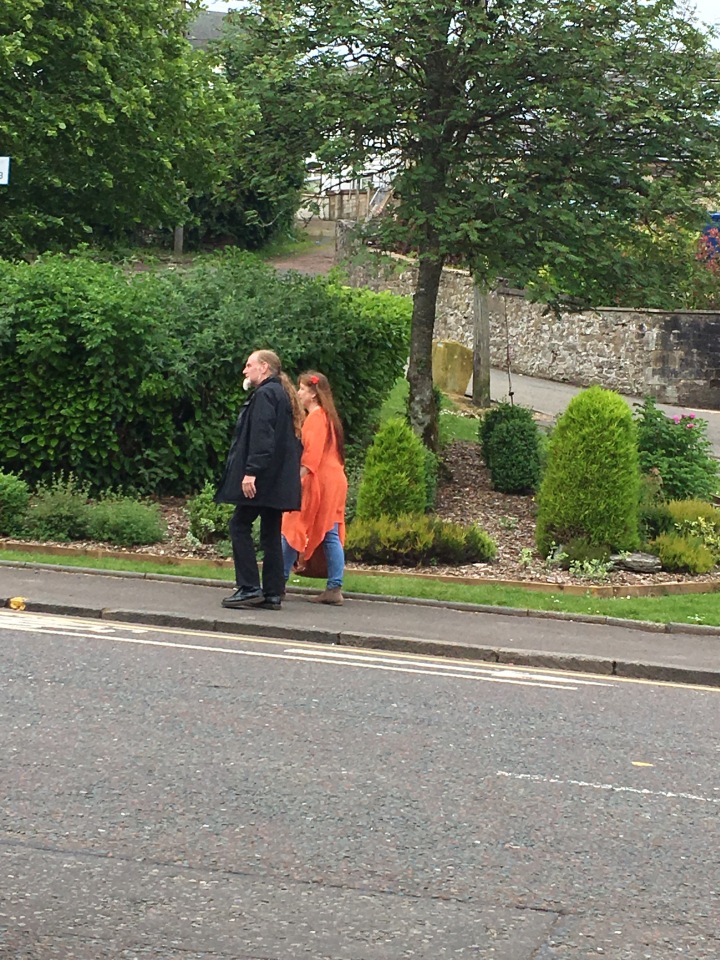 And so to Strathevan, pronounced Straven, in the Clyde  Valley, where we came across another elf, tapping away at his model railway in the community museum: 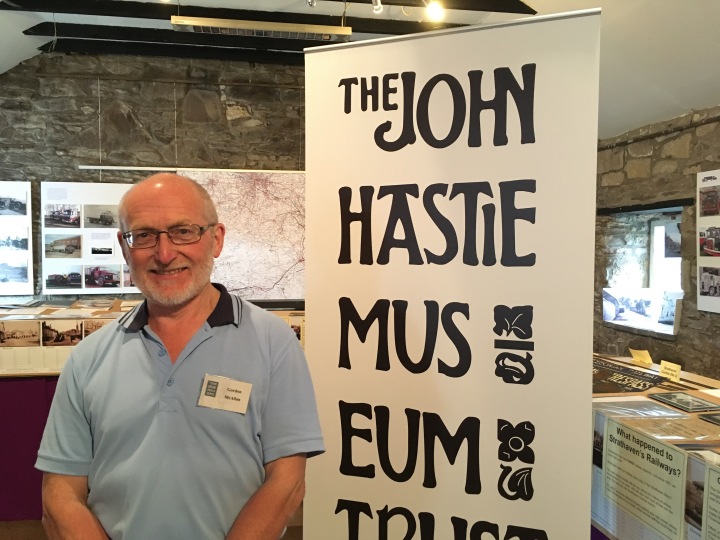 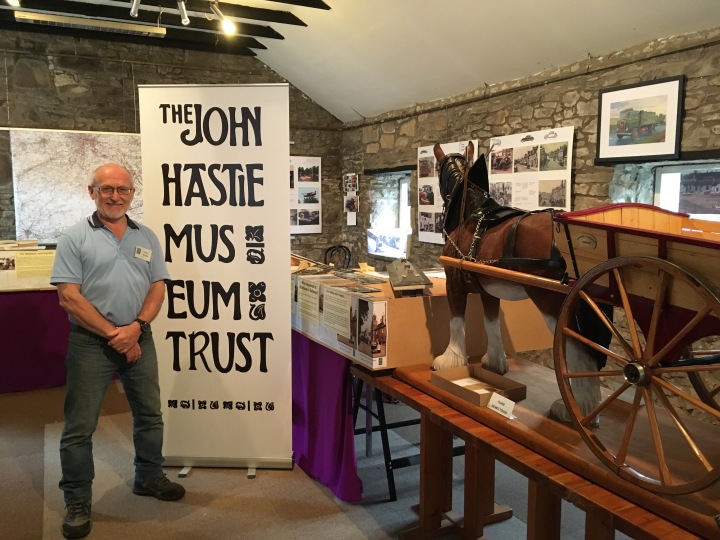 saw what an MP’s surgery looks like from the outside (where is ours?): 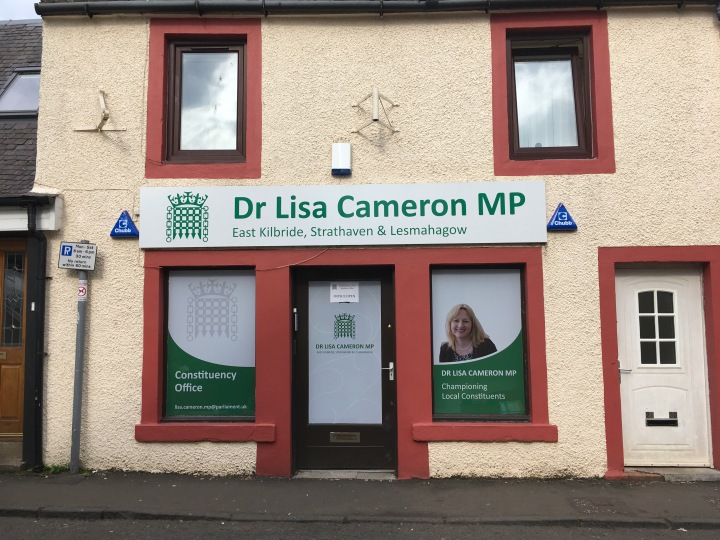 and ate superb food at our lodging, a restaurant with rooms, Springvale Hotel (Rissons), which has won AA rosette food and drink awards annually since 2003. 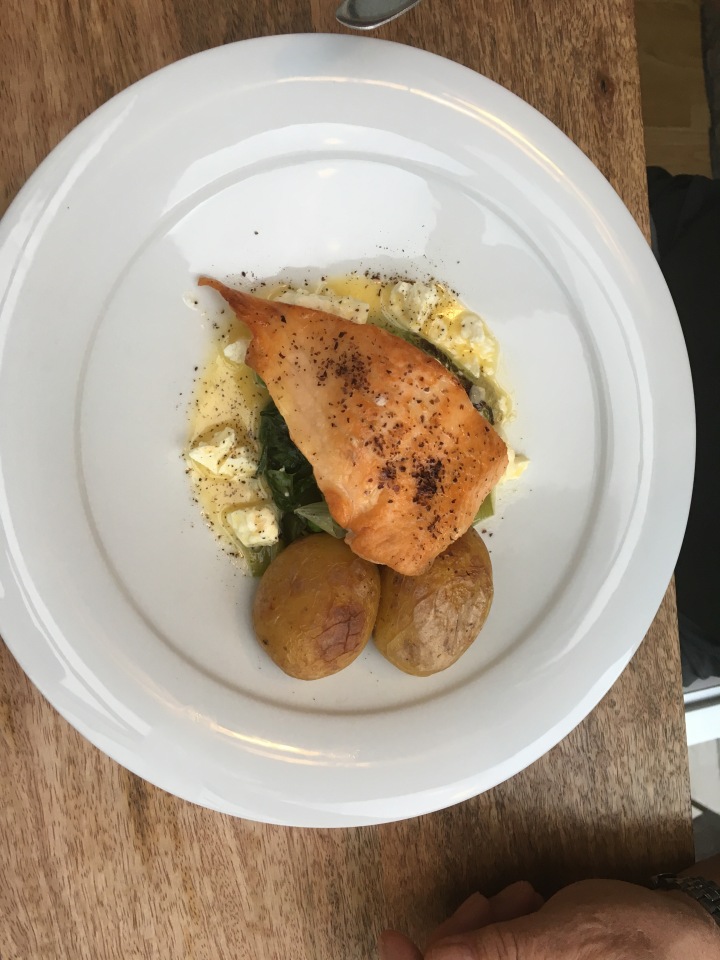 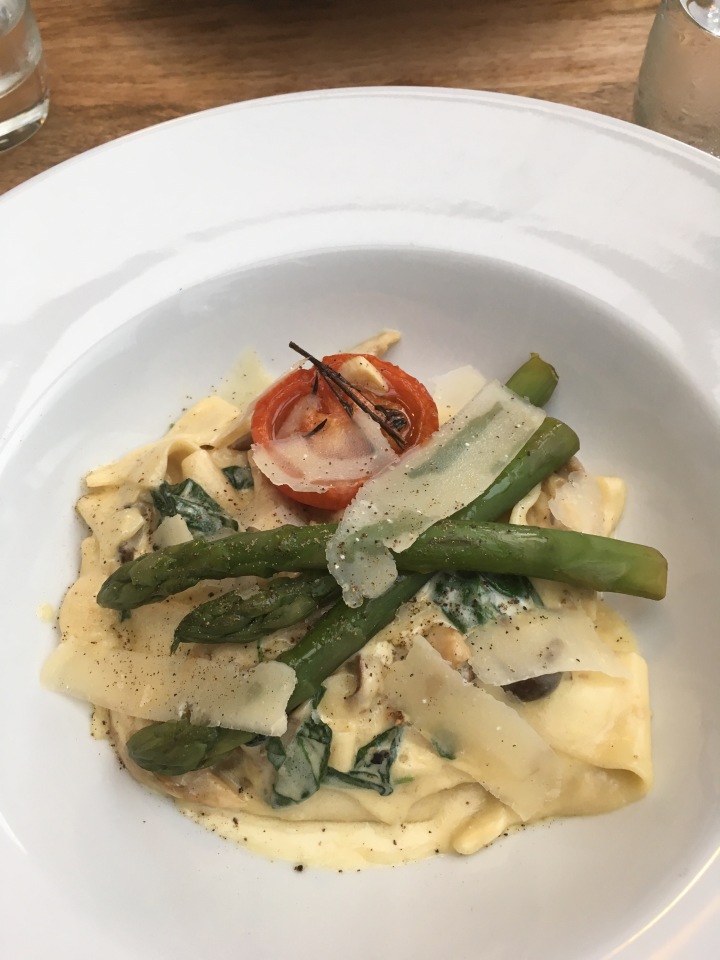 Keith got the lady owner ‘into trouble’. He’d asked for directions to a barber – she lent  him the ‘guest beard trimmer’, which he used and handed back to her husband. It transpired that she’d weighed Keith up, decided his beard colour  was broadly similar to her husband’s, and thought she’d take a chance…….

Birds: curlews, lapwings and the beautiful descending trill of the Willow Warbler.

Smells: the damp of the river and woodlands 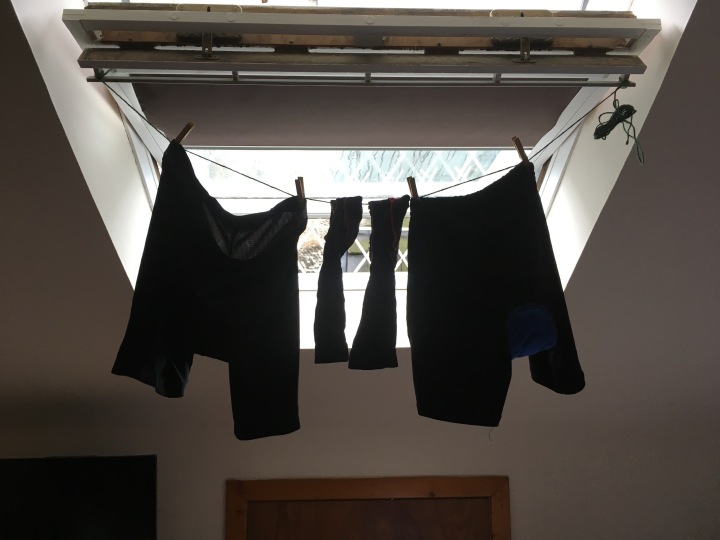