Today was Culture Day. A rarity for us as we prefer to people watch and walk the streets.

Its hot and dusty so what better was to start the day with a fountain?

Especially one the shape of a dandelion clock.

The answer is, of course, start the day with hundreds of fountains…. 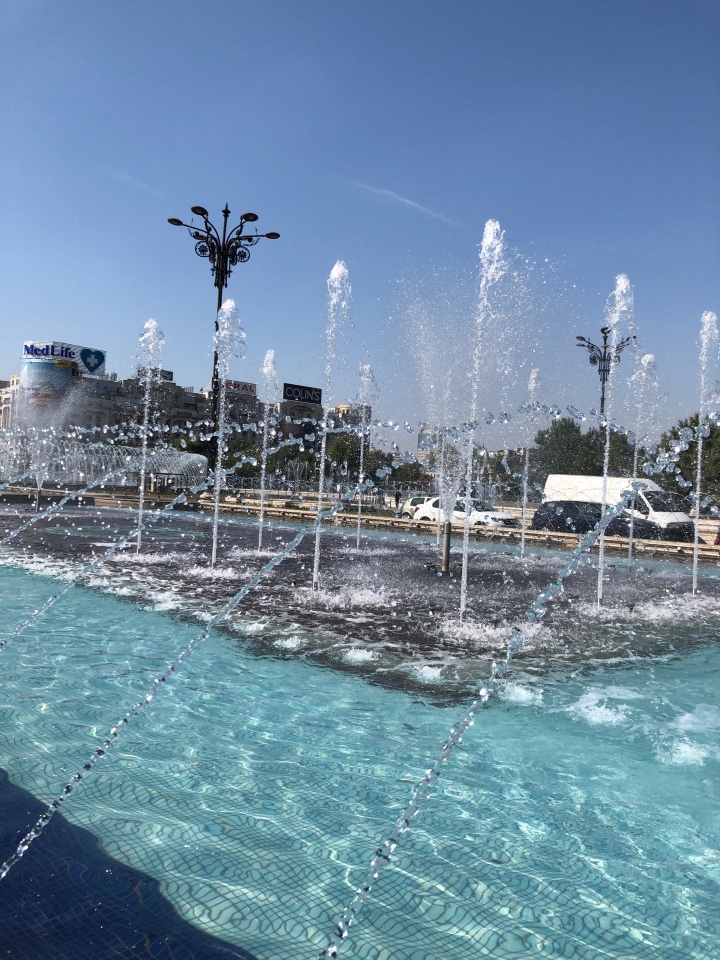 There are more. Interestingly these are extremely clean – and closely supervised by many armed guards.

Security is big in Bucharest. Strikingly we had to show our passports before being allowed to enter the (no longer used) synagogue and holocaust memorial. Sad times.

The building was internally very beautiful, the stories, of course, harrowing.

There were many more photos and stories. I found this description of Jewish exclusion and subsequent ‘disappearance’ particularly disturbing. 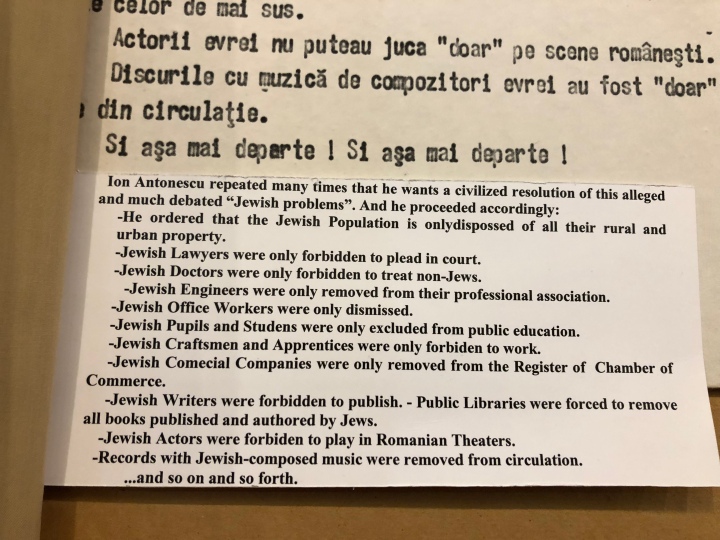 And this description of Jewish rations also: each Jew was allowed only a fifth of the ration apportioned to the general population, and only half that afforded to the gipsy families, a group otherwise considered at that time to be extremely low in social standing.

There were beautiful tiles. 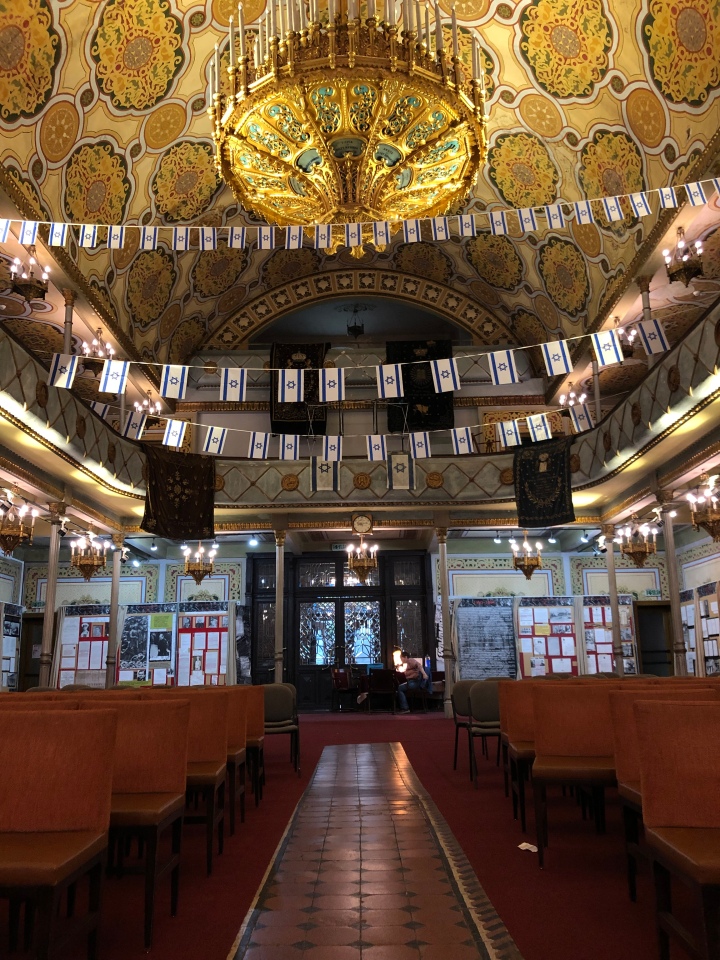 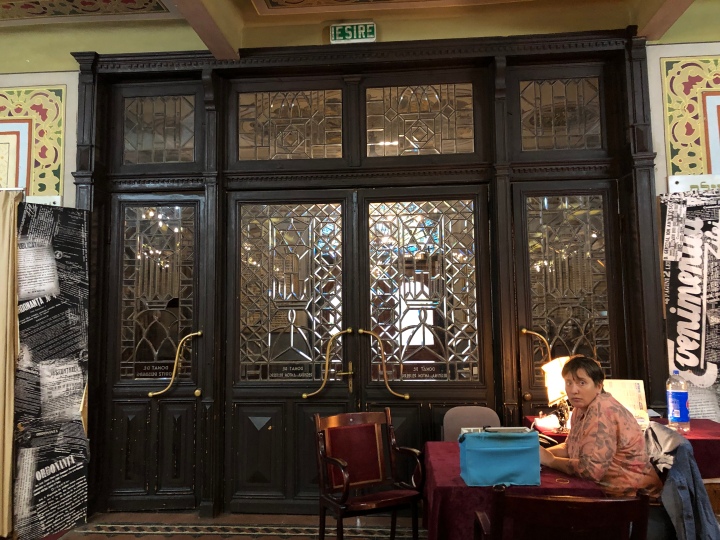 I was struck however that despite attending a secondary school with a very large Jewish population I know little in detail about the culture. An educational need for me.

This is Steven. He made a great flat white coffee for us, helping us recover from our emergency H&M dash/pant buying expedition. (Don’t ask.).

He wanted to earn money so went to live in London. He worked in Bucks building a home for a pop star (he wouldn’t say who). Then he worked for Ocado. After one year he had saved enough to return home but had also seen the way people can live if ‘thinking is modern’ – and misses that. He regrets living in London though. ‘Liverpool or Birmingham would be cheaper,and probably as much fun.’ He is struggling to pay for the items his 9 year old needs as he starts back to school.

Delicious lunch at a genuine Italian Trattoria: pizza and salad. About £10 all told. The salad contained pomegranate and pistachio. Wonderful eastern touches creep in. 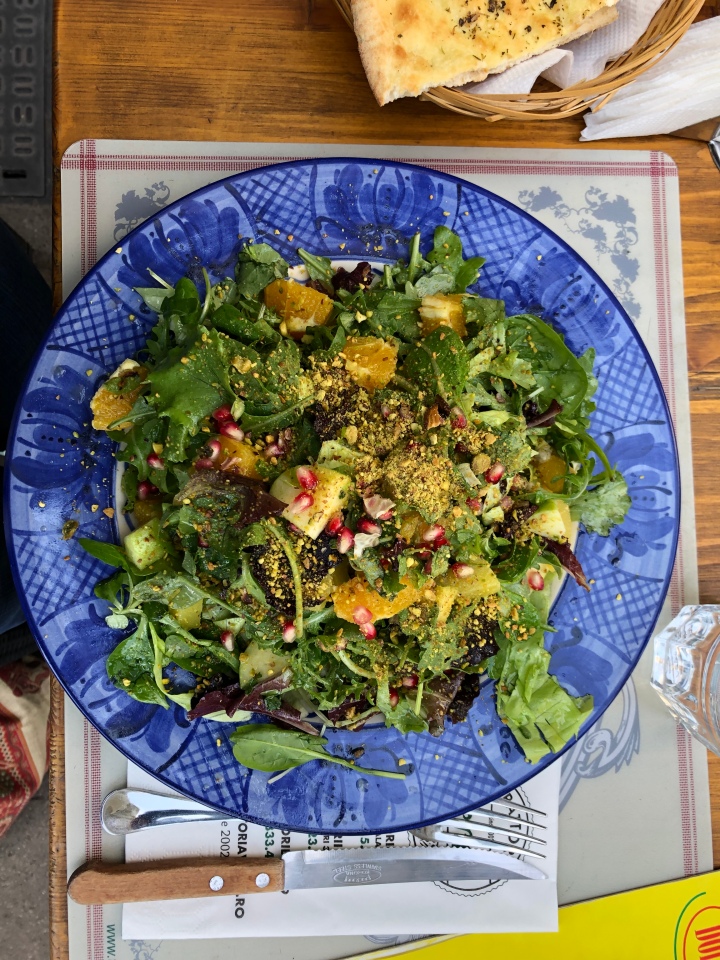 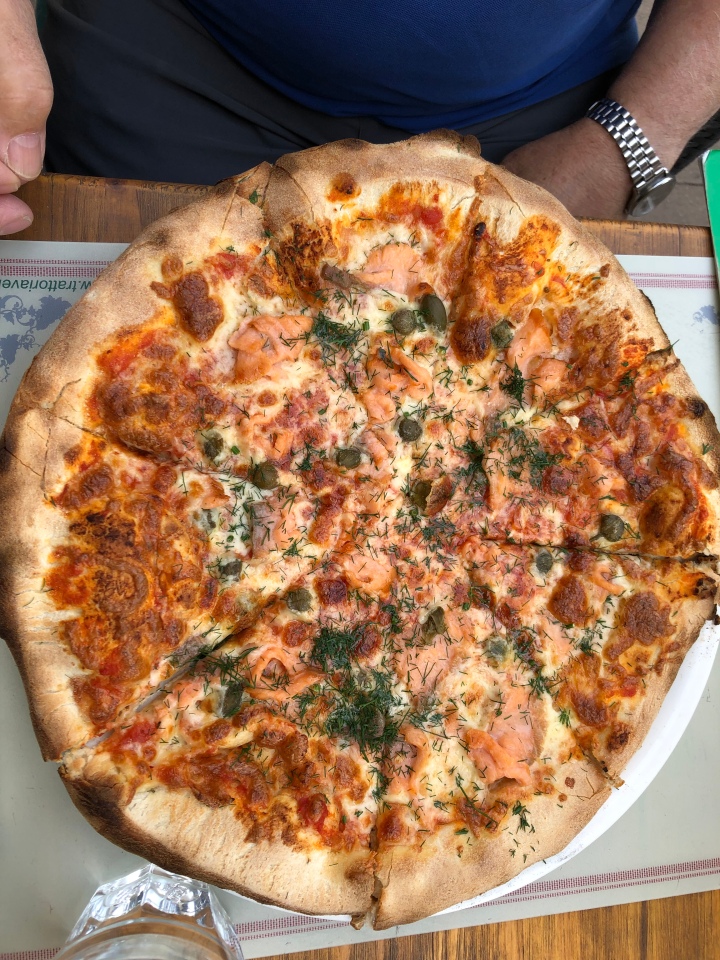 And to cultural item number two. The Museum of Modern Art. It’s in the back if this building : the people’s palace.

This was a rare foray for us – we often find installations difficult to comprehend, and the language employed to describe them a little obscure.

We weren’t disappointed in the initial phases:

Which appeared to be a sort of inflated duvet cover. Note the writing on the ceiling…. apparently made by candle smoke. Yes bare flames held against the ceiling.

Particularly intriguing in light of this notice which caught our eye at the exit:

On leaving, KBP noticed this, and pondered as to its eventual use in construction:

This is not a stack of wood for construction. This is ‘Gheorghe’ , an installation.

Having said that we did see some intriguing pieces and spent a couple of hours inside the museum.

As well as the synagogue there is evidence of other strong religious interest in the city:

The ‘Family Cathedral’ – under construction and HUGE!

I think this is Russian Orthodox.

Finally I found what could easily be my son Rob in a park:

(He likes to sleep in a hammock when touring in his bike.)

And so to the hotel to meet Susie. More of that tomorrow.