Well god had thrown snow, blizzard, burning hot sun, closed bakeries and more at us. Today he went for rain. An uncompromising 100% chance of rain. He did not disappoint.

Knowing we had 26.5 km to do, including lengths of red (challenging, normally steep uphill ) walk we opted to miss breakfast, hit a (hopefully open) baker early and get on our way. So at 7.10, our pockets stuffed with pains aux raisins (and a sneaky extra croissant aux amandes in my jacket) we set off, waterproofs on, head down.

Megg is tough but fair. All wide eyed pleas for clemency, or at least breakfast, unheard we continued up, and up, and up…..until finally….. 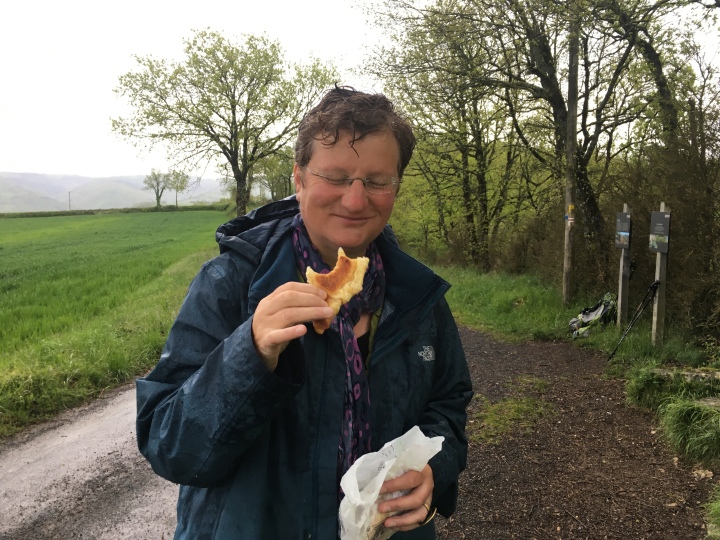 And boy, did that taste good!

Note Megg’s rain skirt made out of hot air balloon material? Very effective – keeps one dry without overheating. And it folds into its own pocket.

Note Susan’s lack of waterproof trousers – that’s one of the items, along with hat and gloves, she would take next time.

Note Keith’s yellow jacket? Well yes, who could fail to.

Believing we had got through the terrible weather early we then relaxed a little although S was hampered by a walking cane that disintegrated, and H by legs that refused to walk without great pain. Still we made steady if slow progress.

And we’re rewarded by an enchanting coffee stop, with still warm apple and almond cake: 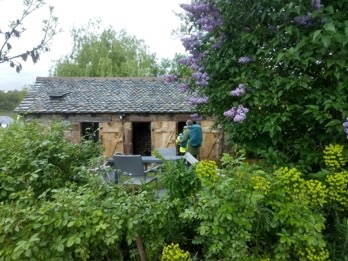 Passed via Estaing, no need to stop as already replenished:

The dog appeared much happier than this photo portrays, thankfully.

Then: the rain, the rain, the thunder and the lightening. An incredible storm, but thankfully we had stopped by one of the not infrequent ‘WC PELERIN’ – a long drop toilet which one of our group had availed themselves of. At one point eight of us were huddled in there, breaking through our mouths and watching the river created by the storm carrying flows of twigs and leaves down the hillside.

These images do not begin to convey the ferocity of the storm.

The auberges are largely converted ancient buildings in tiny remote villages, literally miles from anywhere, often with no mobile signal and frequently no WiFi.

The path passes through remote valleys and we could go for hours without seeing anyone other than another pilgrim. Sometimes not even that.

So – no choice, despite our sodden clothes, weighty packs and various significant aches and pains, than to go on.

To go on to THE BEST GITE WE HAVE VISITED! 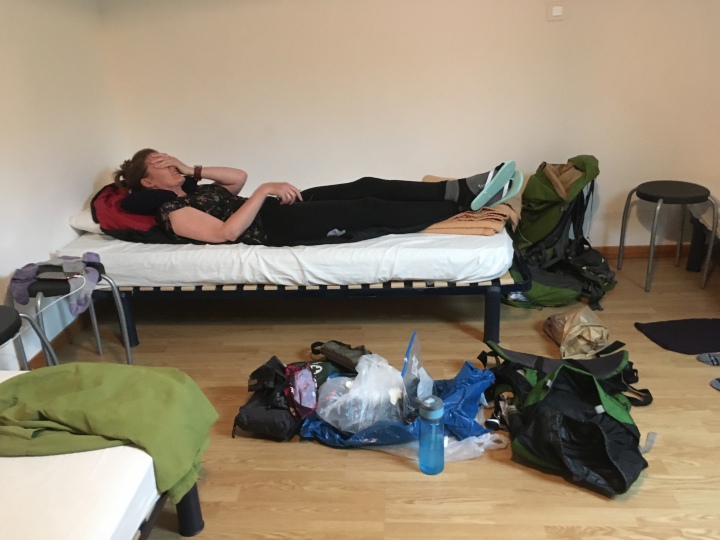 Susan was quietly exhausted. Me less so (less quiet).

The family who run the Gite at Massip clearly love their role. It is warm, clean, welcoming, well organised – and the food is to die for!

The son, Stephan, explains each course. We started with herb fritters with a great bowl of salad.

Then a pork and chestnut casserole with pasta for the carnivores, and Swiss chard with bechamel for both the vegetarians.

And finally a family recipe apple tart with soft cheese and apricot conserve: 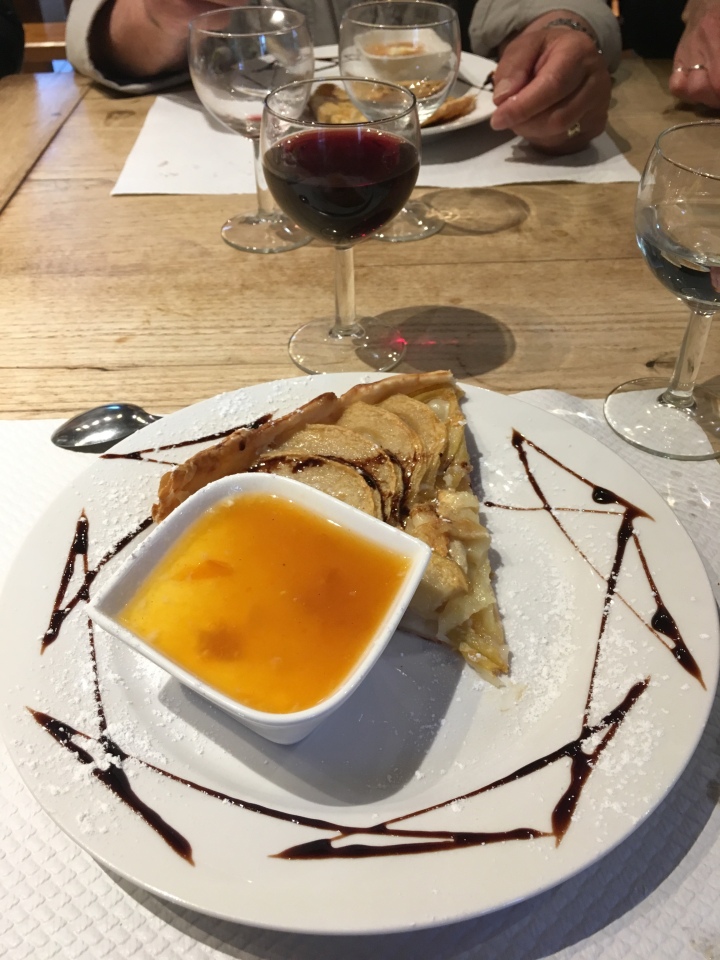 After dinner we all pay and our Credenciale is stamped.

Most gites will only let you stay one night and one has to be a pilgrim.

Typical cost for half board is around 35€. This frequently includes wine.