There is such sweet tension between the beauty of last night’s sunset and the horror of being eaten alive, again, by mosquitoes.

(Random (but appropriate) photo to improve attractiveness of blog. Not)

Keith showed his true worth (actually worth more than this) by coming to the fore with this, a deceptively tedious booklet with untold qualities of strength and flexibility.

In short this manual helped us massacre scores of mosquitos, clearing the living area. We knew the bedroom was safe as we had thoughtfully closed both the curtain and the door thus making a barrier impenetrable to even the most persistent attacker. A sanctuary.

Not wanting to compromise this oasis of mosquito- free space, I tiptoed in using simply a flash of my iPhone torch to guide the way. I grabbed my night wear and slipped back round the curtains to the main body of the van.

We crept in and under the covers to be almost deafened:

and so forth. The boudoir was thick with them. More attacks by Keith the Slayer, manfully swashbuckling away with his Wilderness manual in lieu of jewel encrusted sword.

Rather than taking clothes off for bed we put them on. Long sleeved shirt, leggings and socks in my case. A hot and itchy night as we weren’t able to open any windows. Serves us right for ‘freedom camping’ (read being imprisoned within one’s own accommodation) by the sea.

The view this morning was again glorious. 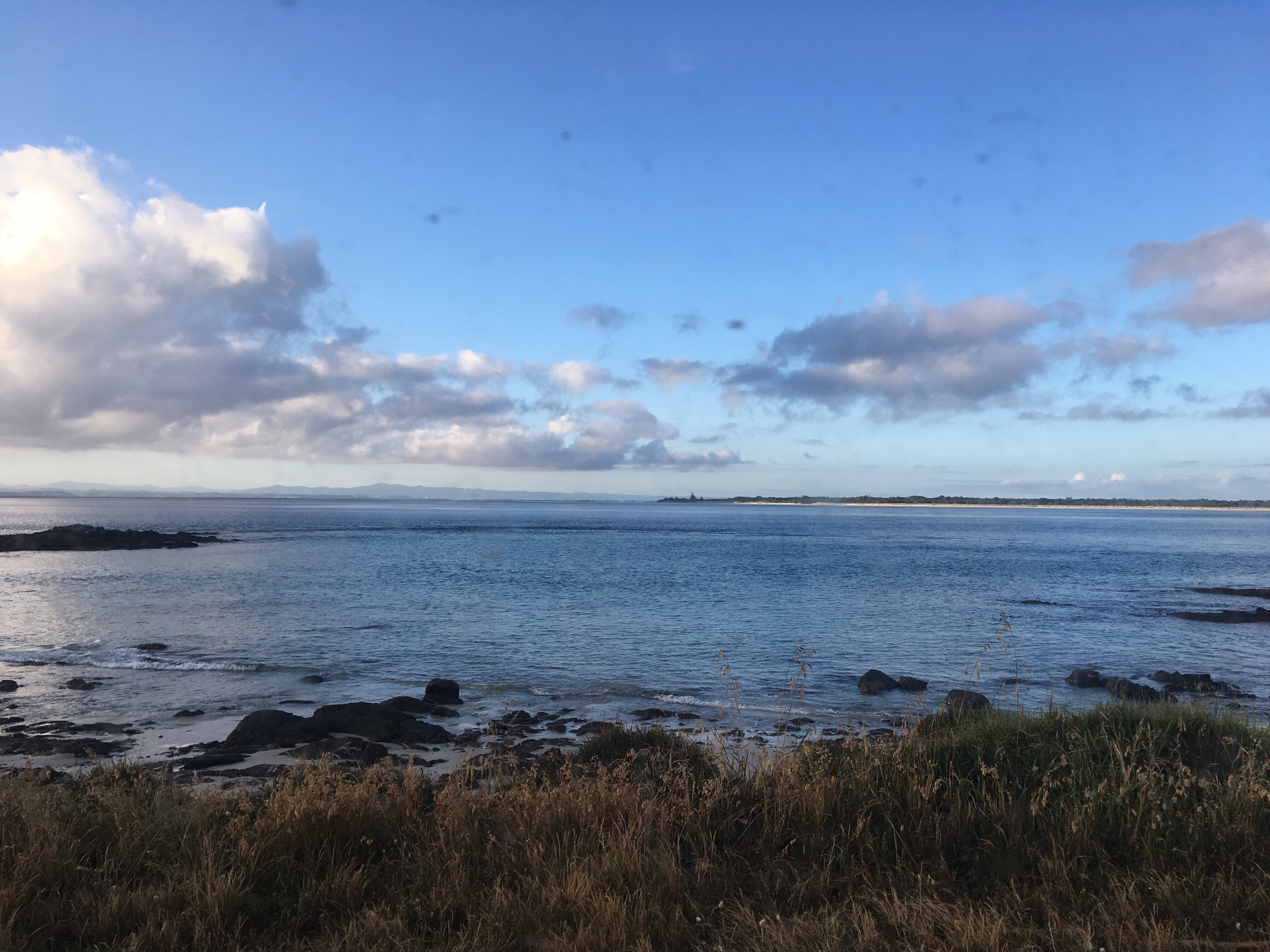 However we were minded to move on ASAP, full bladders and empty stomachs became an irrelevance.

Which was how we met Father Christmas in mufti. In short: we stopped at a cafe. The building was attractive.

The lady in charge offered to show us round upstairs. Then called Gary.

Gary Blick (which we know now is Black with an NZ pronunciation) * is, he says, happily divorced and pleasantly disconnected from his children. He has taken on the challenge of renovating this building, an old saddlers, and the grounds behind, to run as a backpackers’-hostel. A giant of a man he has built some huge bunk beds, and mezzanine double beds. A gentle giant he told us of his mother (94 and has eaten her way through the herd and the implements, now starting to eat the family farm, which father sold for many thousands of dollars, itself: his take on her nursing home fees); a friend who died of throat cancer; his plans for the hostel and the affection he has for his goat, currently eating his way through the scrub.

Asked if we could take a photo he dashed off saying he needed to change his shirt first: 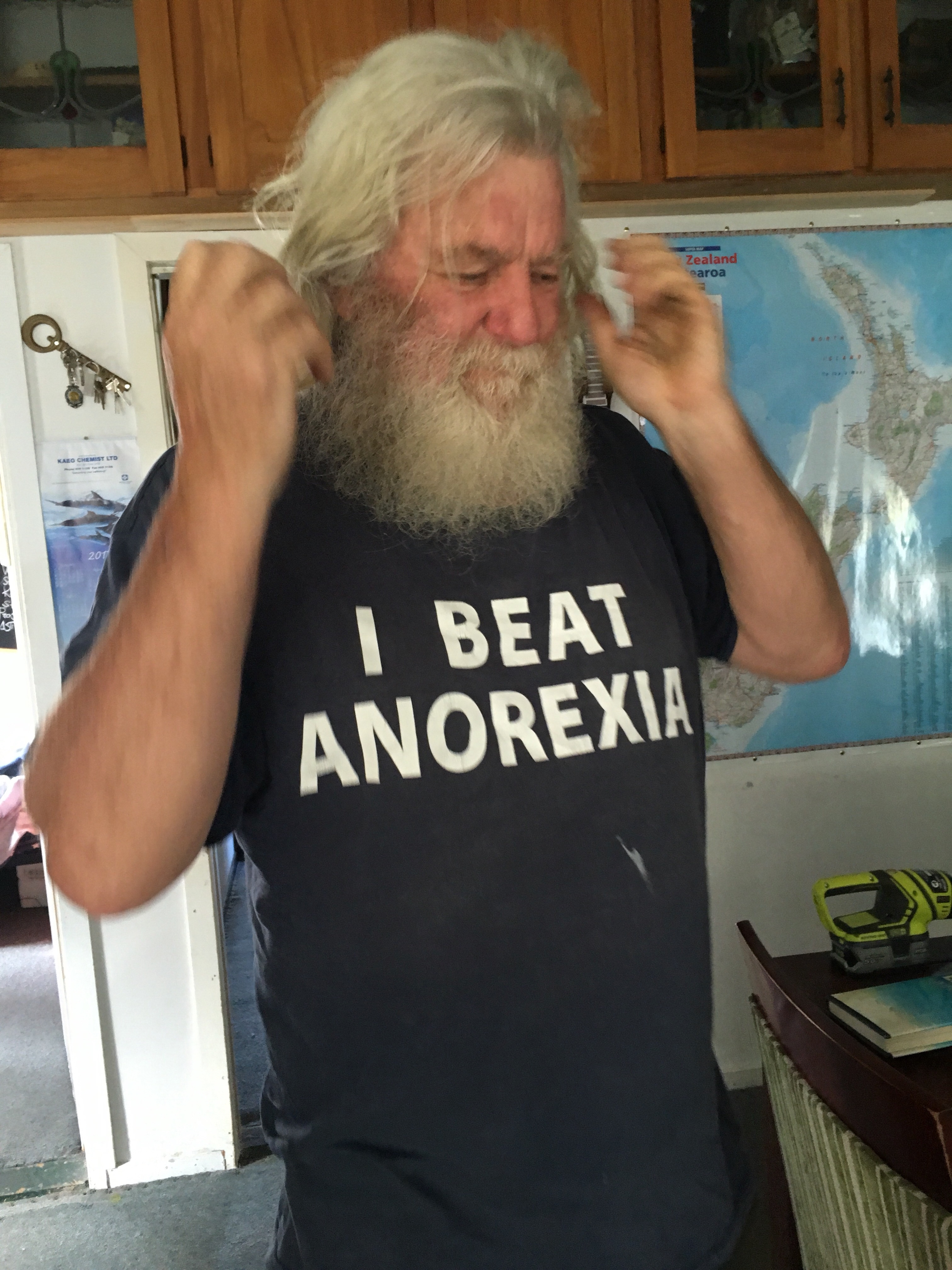 This is with the preferred shirt.

Then he wanted to do his hair.

FC in mufti. He has the twinkly blue eyes too. He runs the Helenback backpackers hostel. Helenback? Yes. Spend a night there and you’ll have been to hell. And back. His opinion.

We spoke a couple of days ago about Hundertwasser, an Austrian artist who spent much of his life in North Island, New Zealand. He designed some toilets (remember he is the enemy of the straight line): 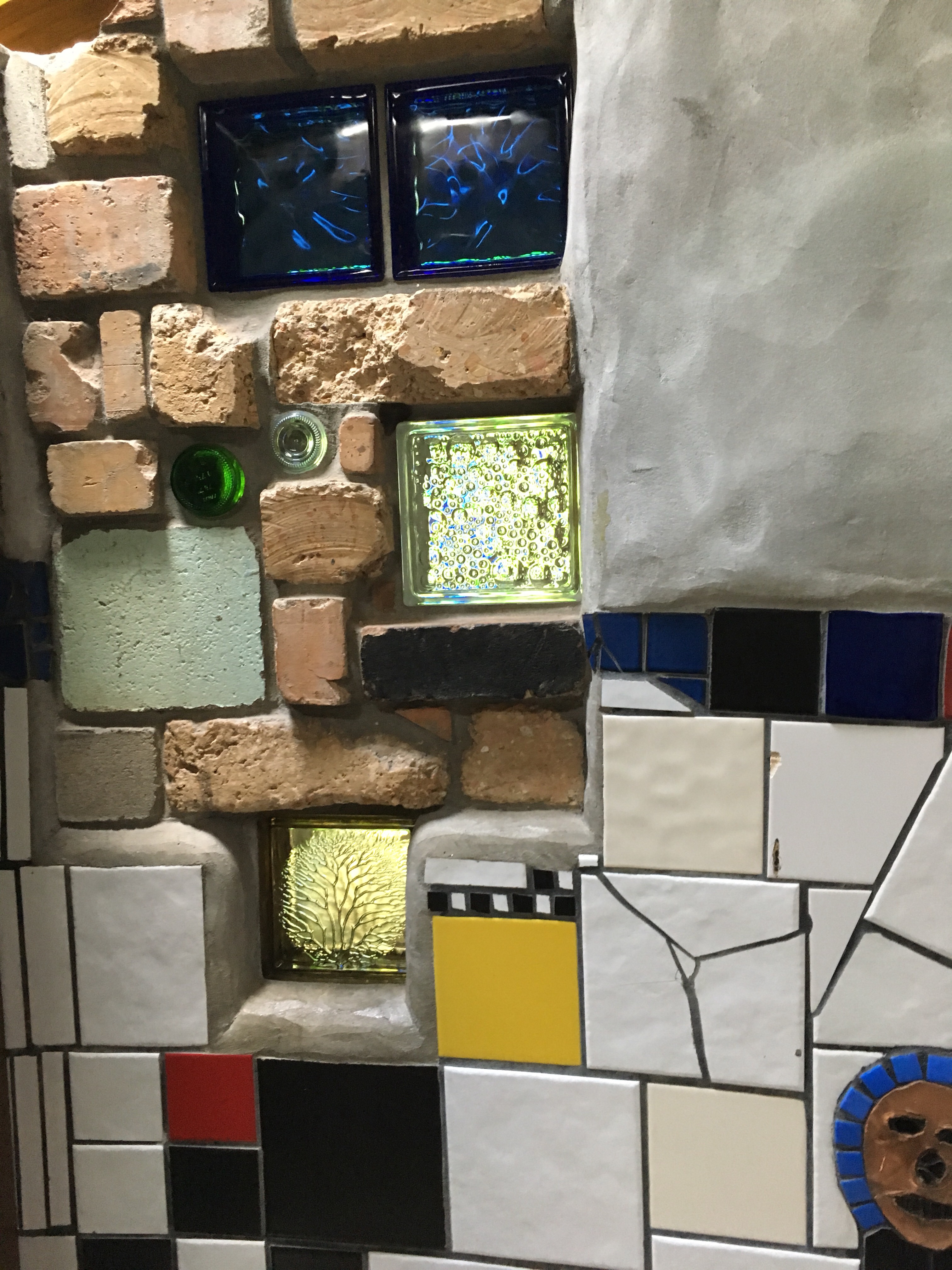 View from within toilet cubicle. 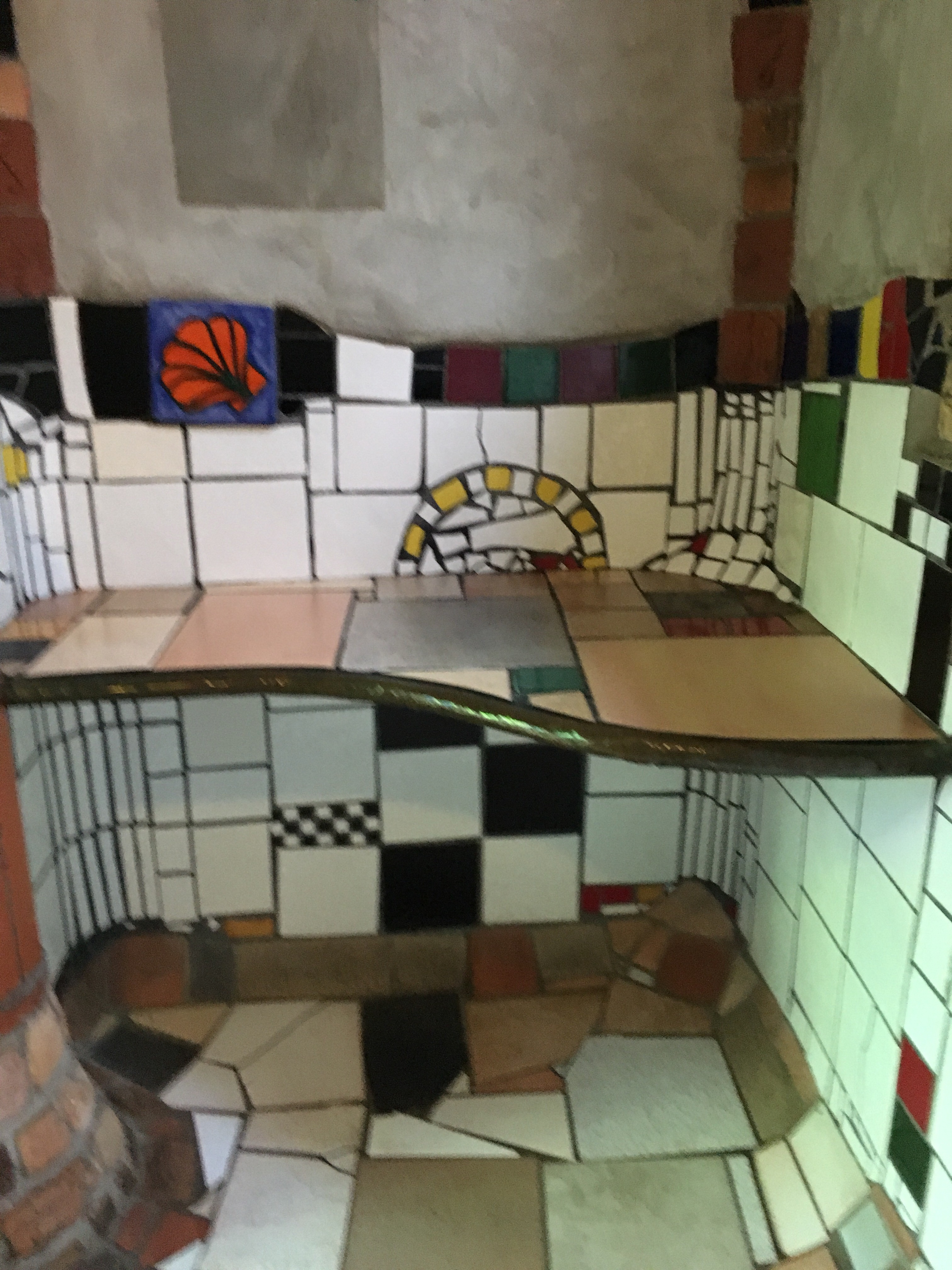 Health and safety. Look at the people standing freely in the truck at the back of this train:

Oooo… they might fall over. Yes. That’s the risk they take. End of.

School children. The three living at tonight’s campsite (children of manager) came home at 2.40 today. All in bare feet. Not ‘carrying shoes’ bare feet, or nervously picking their way along bare feet. Just bare feet on a road with no litter, no dog fouling, and sensible traffic which slows to pass.

And jobs: most people seem to have more than one but this seemed an odd combination:

The phone number reminds me – there is a system where numbers and letters are combined for phone calls. Eg: 0305 LAW for the lawyers.

I was tickled by the unambiguity of this septic tank emptier today:

And on that I’ll finish with a picture of our biggest impulse buy mistake this holiday:

Home tomorrow we need to ‘farewell the van’. ….

*wrong again. It actually is ‘Blick’. Will I ever get the hang of this?