This is the refrain I start singing each day (though not as well as Johnny Cash and Willie Nelson) but actuallly I find I take to travelling so much that maybe it should be Lee Marvin’s ‘ I was born under a wandering star’ – and my singing approximates his quite closely.

Today’s plan was simple: up towards  Nelson, coffee stop, some visiting around Marlborough Sound, then down beyond Blenheim to Clarence to witness the effect of the most recent major earthquake on the infrastructure of roads etc.

Then someone clipped our wingmirror on a narrow bridge. And didn’t stop. This was complicated by the fact that a peloton of cyclists was likely to follow behind (a150k road race), and shortly after this incident a fire engine then police car came hurtling in the opposite direction. All a bit fraught after our days of relative solitude.

Of course it matters not who was driving – but it wasn’t me.

Risking life and definitely limb I returned to the scene of the incident, took photos and collected the debris. Surprisingly useful as ‘the man who can’ managed to fashion something that helped us limp along to a man called Jim. Good with glass. 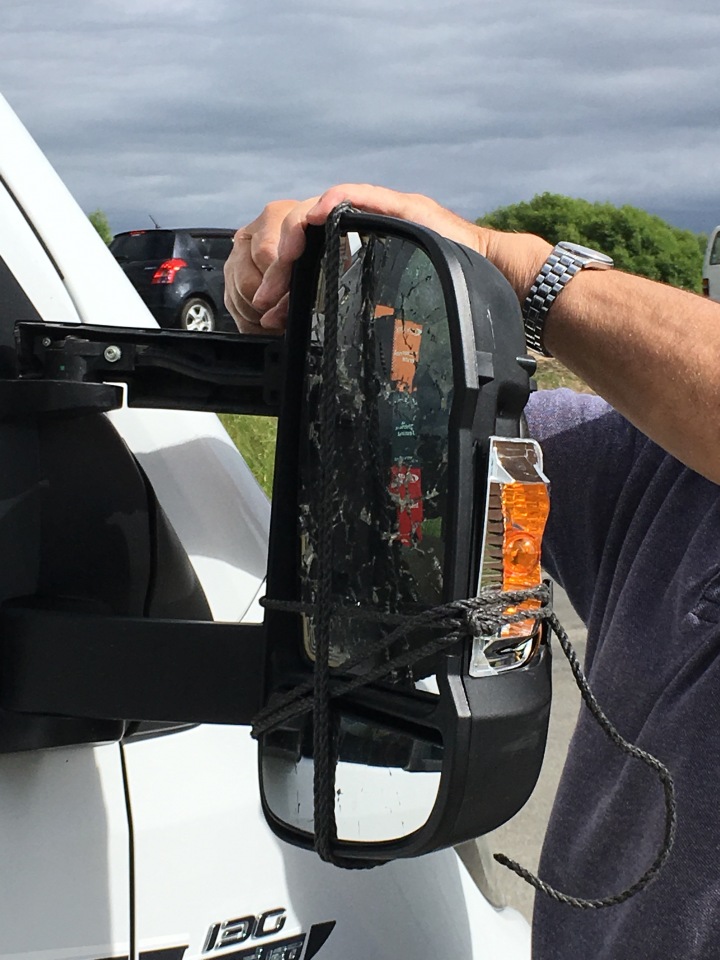 We missed our coffee stop.

So we doubled back on ourselves to visit a jester house cafe near Nelson, former New Zealand cafe of the year, boasting many attractions including tame eels, and also the former family home of a good friend of mine, Megg.

Megg was on the masters course in Liverpool with me, and is a genuine kiwi (I hope that’s an ok description. Megg?). She’s one of the reasons I’m here now – so we can work together on some shared reading training in Auckland next week.

The cafe was so entertaining, although I don’t think Keith was particularly impressed when I appeared wearing a tiger’s tail.

Even the B and B accommodation fits the bill. 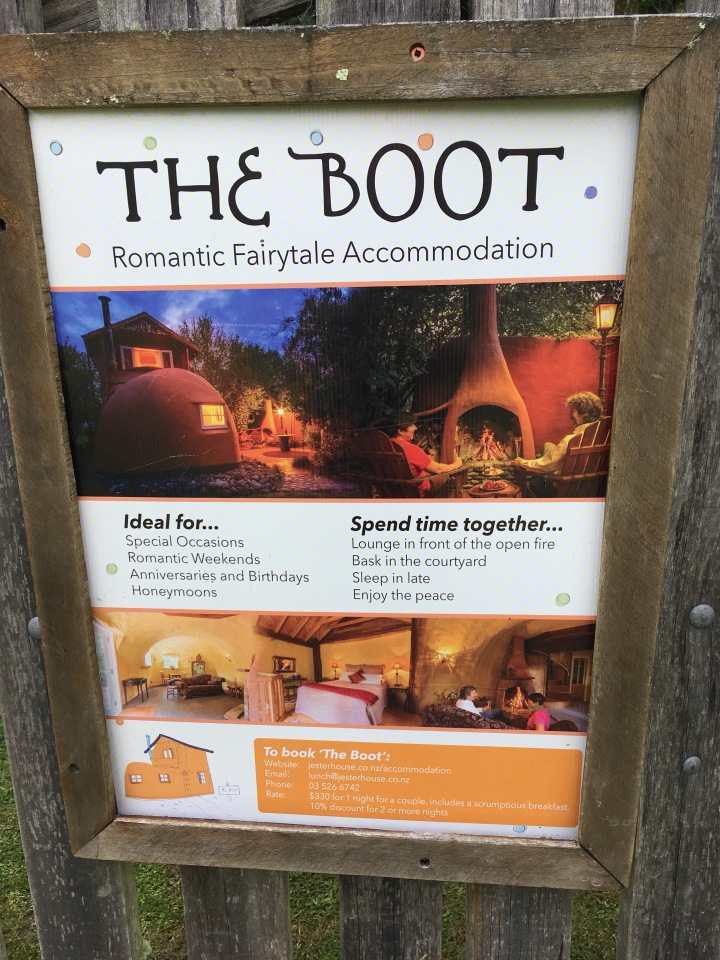 I thought this award was wonderful – would that more companies used this as their game plan! 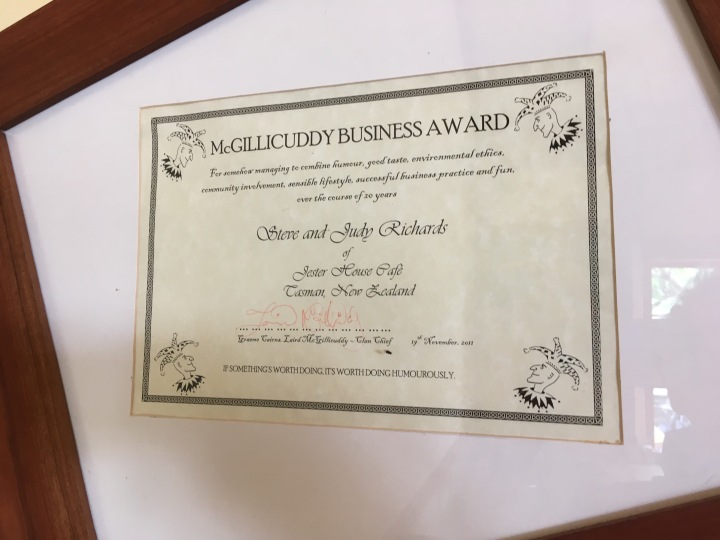 Jim. Good with glass. He was good with us too. Got us back on the road – we can see what’s behind now (rear view mirror just shows the unmade bed). We need to get it fully fixed on Monday, and have to pay the excess too. 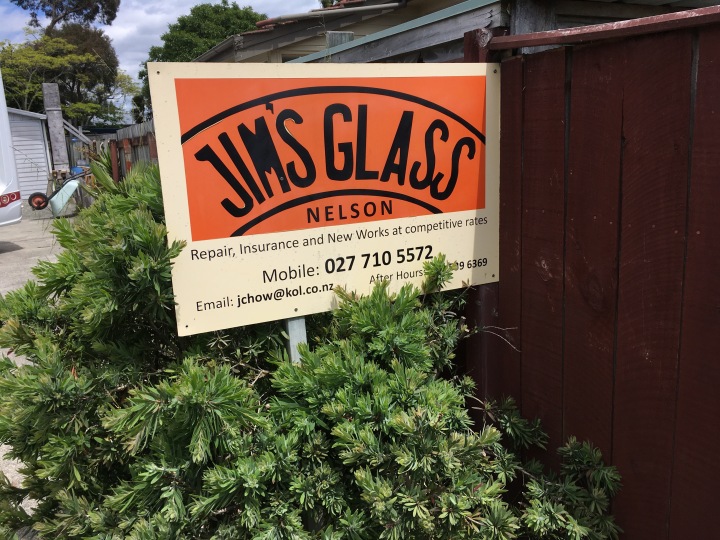 Fortunately we took the insurance which avoided us having to pay up to $7500 at this stage.

NZ : huge difference between north  and south of South Island. In South was difficult in some remote locations to buy any fresh food. In Blenheim we visited the hugest supermarket I’ve ever seen – like IKEA!

They have virtually no stop signs and rarely have traffic lights (why would you) using People where some traffic control is necessary eg road works.

It’s obvious traffic lights are the exception. They come with instructions! Including a ‘please’.

There are huge variations ….. 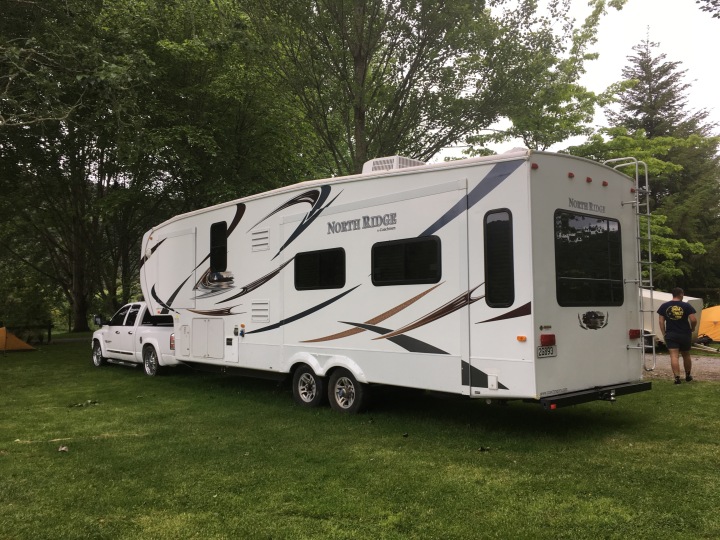 And so to bed, by main road in Blenheim, but also by river.

And evidence of more NZ kindness. 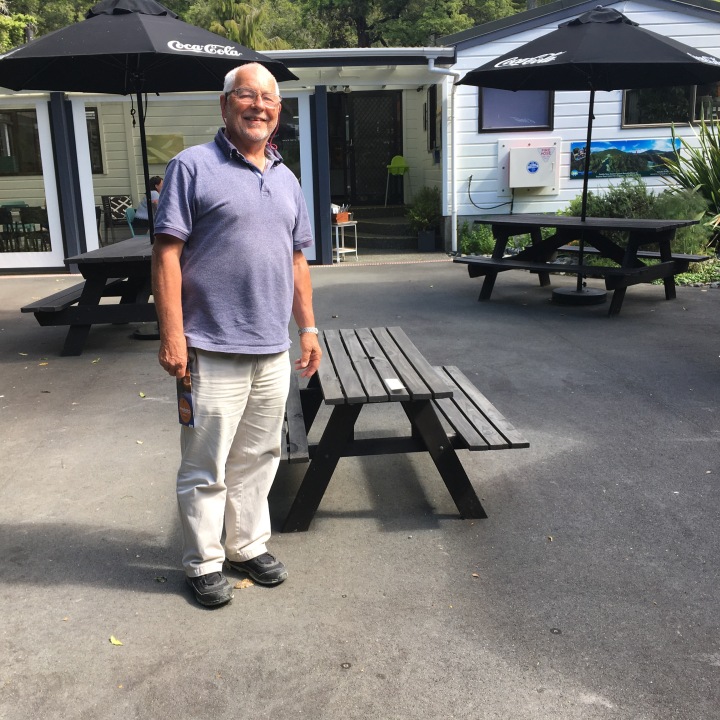