An early morning run of barely 5k around and around the massed overwintering band of caravans at  The Glen Dhu Bay motorhome site left me limp- having done so little for two weeks other than potter around my legs seemed to have lost their mojo. The view was good though:

and how nice to eat breakfast in the sun?

What better choice after this braving start then than to do the ‘Outlet Walk’ in Wanaka?

But outlet in New Zealand doesn’t mean shopping mall, it describes the walk that goes from the source of the river Clutha as it leaves Lake Wanaka in Otago and travels at rates of up to 25km/ hr for a total of 338km to a place called Balclutha, a place we had passed through a week ago on our route south on the east coast.

The waters of the Clutha are glacial, green and clear.

Throughout the walk we were serenaded by birdsong, entertained by ducks, herons and cormorants as well as mountain bikers young and  old, some more able than others.  We watched fly fishers. The track meandered through ancient forest 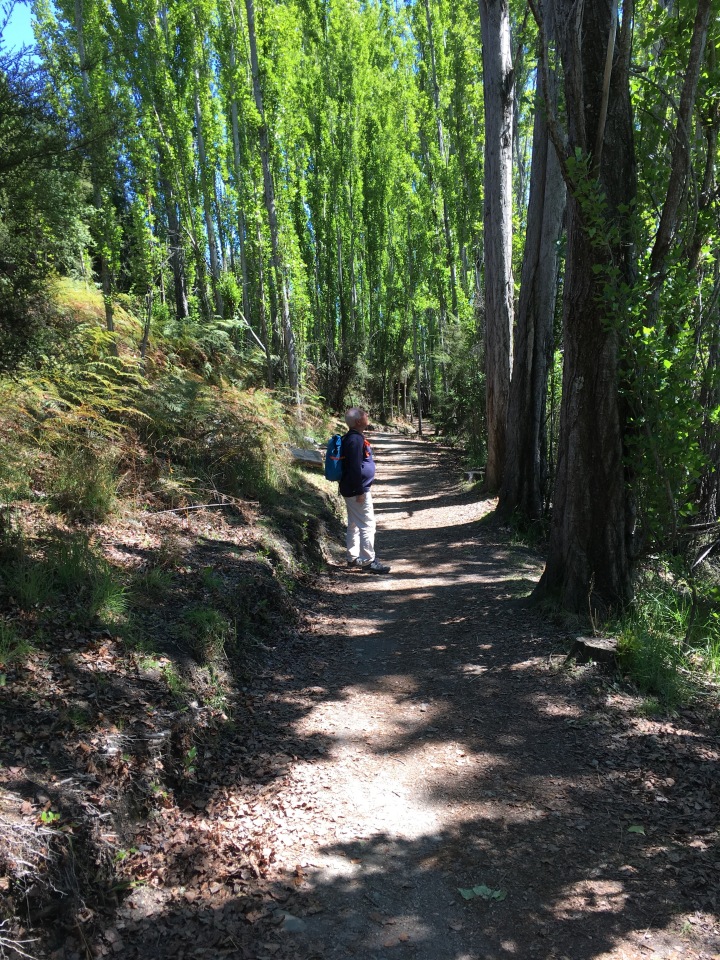 and then open ground thick in wild thyme,

I dozed in the sun, way too hot in double merino jumpers, thermal leggings and waterproof trousers, merino scarf and hat. Well it was cold at the campsite this morning (but was 20 degrees on the walk).

Coming back we heard the dum dum dum of A ghetto blaster. Then realised it was three people sitting cross- legged on the banks of the river, playing portable drums and singing. I took a video of the area. It did not catch the sound well, but conveys the atmosphere of the area. ​

Onwards through the mountain passes, along the lakes, towards the coast. The Haast Pass allows direct traffic (when not closed by snow or rockfalls) from the east to the west coast and was only finished about 50 years ago. This river at the Gates of Haast was one of the major impediments. Look at the size of the boulders it brings down – Keith seems quite tiny in comparison: 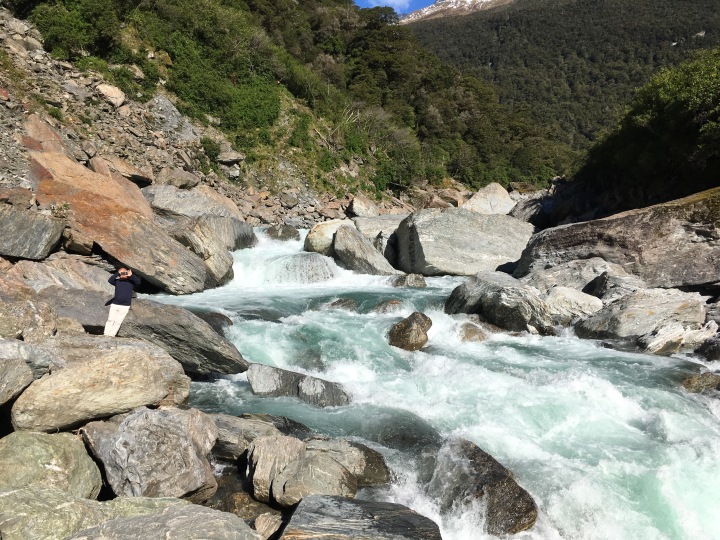 Just upstream from here lies the beginning of one of the longer distance walks. It takes 3-4 hours (6-8 in keithHelen time) to reach the first hut which has four bunks and no heating or cooking facilities. The start of the walk requires that the river be forded. We were shocked to see this girl wading across by herself about 5.15 pm and hope she had thought it all through.

The orange triangle on the far bank marks the start of the walk….
Tonight’s view. Freedom camping. Yes!

We are alone in the lay-by. Sporadically vehicles pause, look around then drive on.

Aah but all that glitters is not gold. …. see tomorrow’s update.