We were neither raped nor pillaged in our lonely spot and so woke to birdsong and sunshine in Gabriel’s Flat, the site of a gold rush which attracted 10000 men. The circular walk with interpretative boards explained the rather disjointed landscape beautifully and evoked a clear idea of the ‘life’ of a prospector and their eventual subsumption into the rapidly growing corporates who found ways of extracting more and more gold with fewer and fewer men, but by totally destroying the landscape. 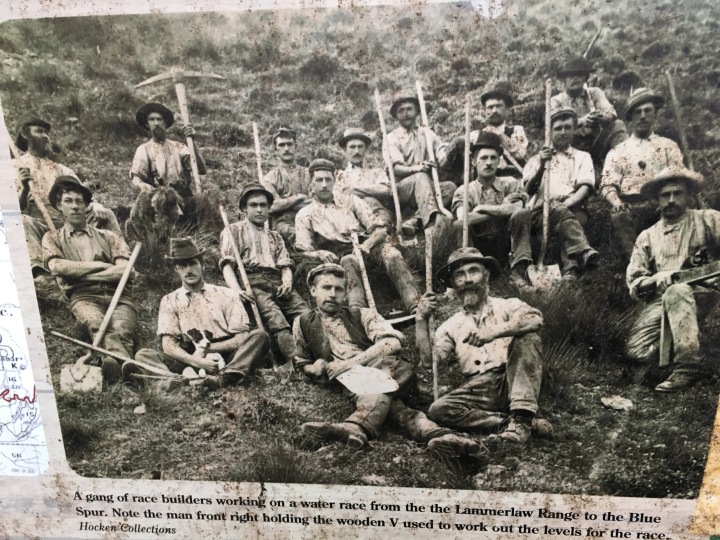 The ‘men’s’  faces are touching, their hats the more so. Very few of them look comfortable.

We learnt how each prospector  had a piece of ground 24×24 feet which was pegged out. However the land constantly slipped so there were incessant arguments about the provenance of any gold found.

Those who made money were the store owners: this couple bought a business for £25 and had made £900 within six weeks! The lawyers also profited. Enormously.

The engineering was fascinating. Huge quantities of water were required to rinse the earth and to force the gold out of the hillside. So an elaborate system of ‘races’ were arranged to bring water from rivers up to 50km away, across a rocky and undulating set of contours. This was contrived using simple plumb lines.

The race man controlled all the supplies, and was said to be ‘worth his weight in gold’  as without the water prospecting was not possible. 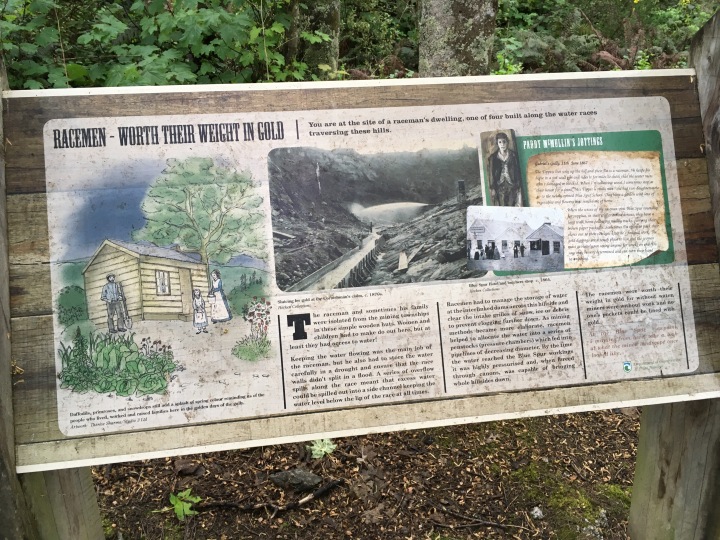 The raceman here had two daughters who regularly visited the local store in their crinolines. There were touching stories of these two with their mother surviving on the hillside whilst Dad rode out everyday clearing ice and rocks from the channels.

Altogether an interesting site, with remnants of the mining clearly visible, good story boards and a pleasant walk to start our day.

This is the entrance to one of the mine shafts, although most of it was open mining.

And this reminded me of securicor/G4S as the cart bearing the gold was taken away, heavily guarded. 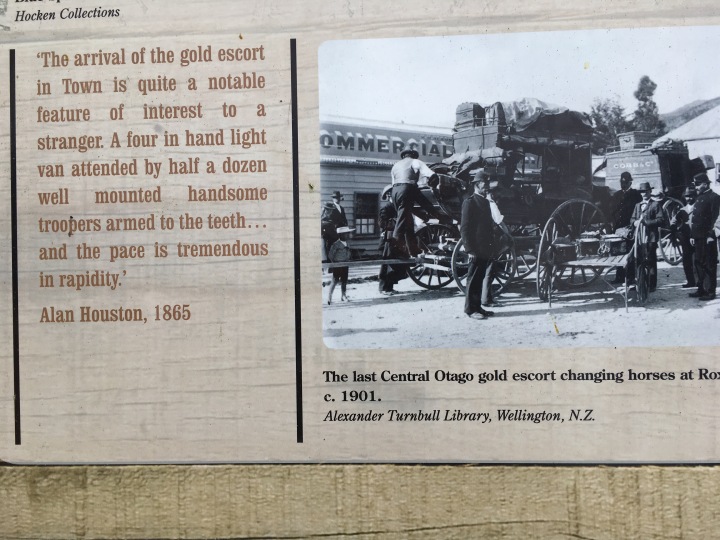 This morning I was also invited to do something I’d never contemplated doing before. But more of that later. *

The town local to Gabriel’s Flat ,Lawrence, was fun and welcoming, and put us back in touch with people after all this worthy history stuff:

They represent important locals with a sort of giant peg doll: 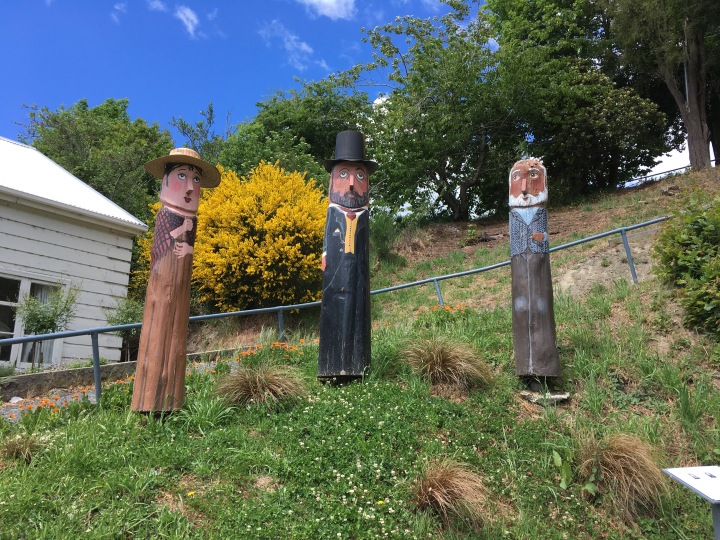 They offer food I’ve never before tried (and I love the doggy welcome):

Even the butcher has a sense of humour: 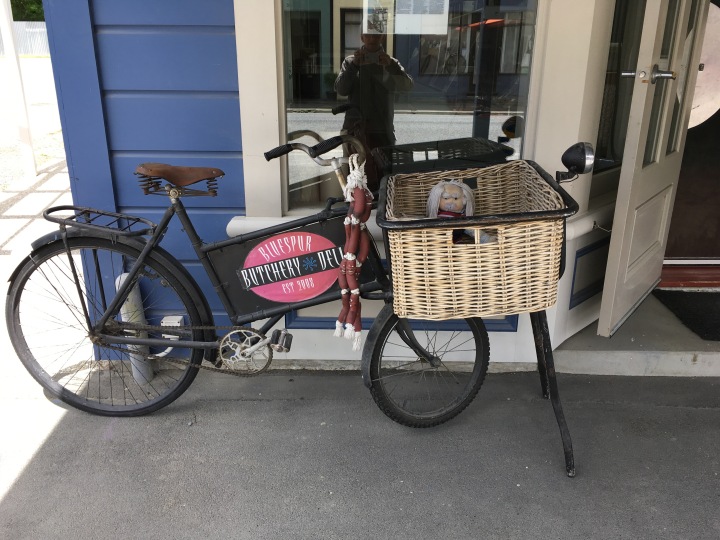 2) contents of his basket.

I suspect the meat is not ‘happy chicken’.

From here we followed the scenic Otago coastal road, past a place which needs no further captions: 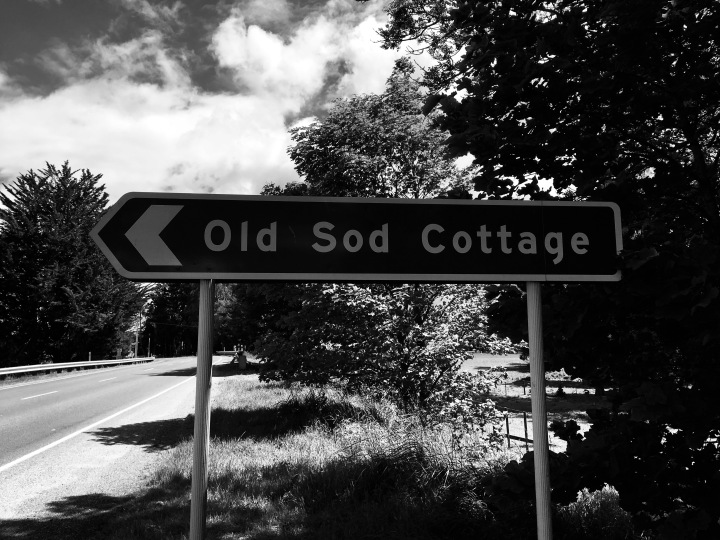 And on to Nugget Point.

Amazing trust at the campsite: nothing locked, keys left in the lock of the cabins which sleep up to five and have beds already made up (great for a family travelling round the island) : 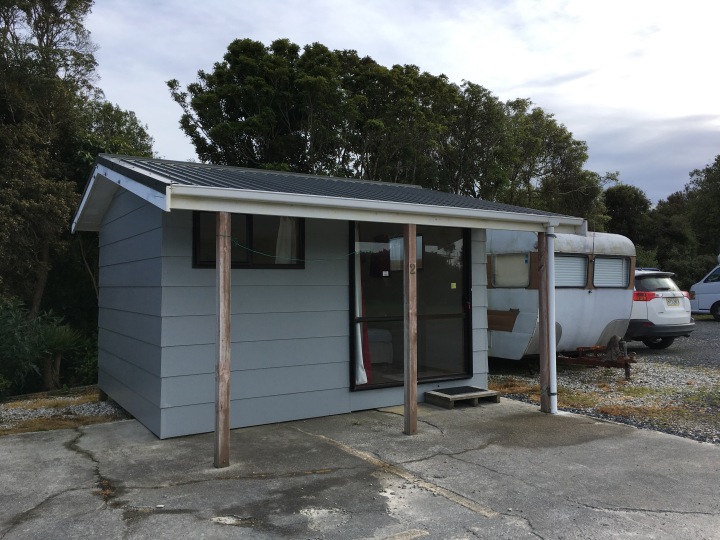 Most sites offer tiny cabins like this. There are also hot showers, cooking facilities, dining area and tv. Sometimes a separate library/games room. Normally for around $45 (£24)/ night.

Nugget Point: we saw one yellow eyed penguin (rarest penguin in the world which really only breeds round here):

No picture of my chappie I’m afraid. I lay on the bottom of the hide, looking through a drain hole and looking very silly to boot, getting extremely muddy. But after an hour I saw him and was greatly pleased.

At another bay close by we saw huge numbers of nesting seabirds, seals, and drunk young men (only three) who climbed over the fence by the lighthouse and wobbled precariously down the cliff, carrying beer bottles, lurching towards the sea. Obviously competing for the Darwin Prize (look it up…).