Around 120g. That’s how much anti chafing cream I brought with me and it’s going to last the trip. I’m pretty generous with it. My ‘at risk’ areas aren’t too extensive. Do with this info what you will and let’s get on with the day. 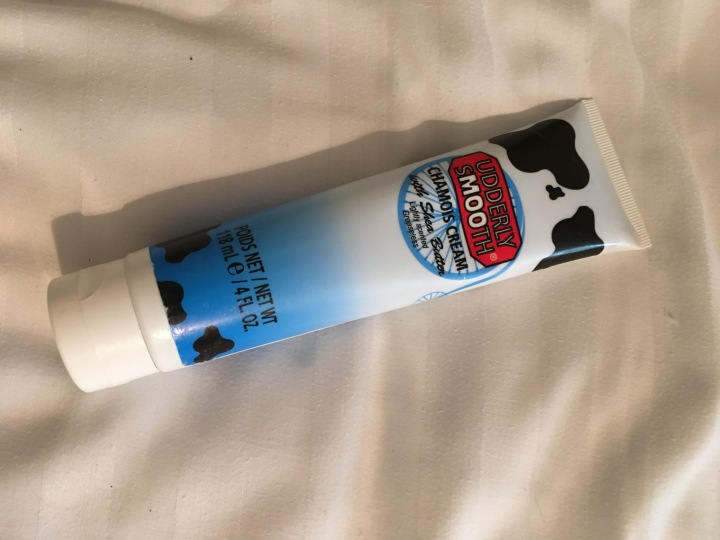 Wheels. Preferably two. Not too small, with lots of spokes.  John Hitchcock, a St martins centre IT Resource  every Tuesday and long time colleague of Keith in this role can be considered a kind of special advisor on this trip. He cut through a lot of the hype of the bike manufacturers and retailers, describing the features likely to be important in a bike for a road trip such as this.

Lots of spokes- the wheels have to withstand some pretty large shocks from the potholes we thunder through and the incredibly rough surfaces we have battered along through these last 14 days/almost 700 miles.

Don’t worry too much about puncture resistant tyres, he said, just keep the tyres well inflated. (But not so well inflated as another cyclist doing this trip who had theee punctures in one day, possibly due to overinflation using CO2 canisters on the hottest days of the year). …. Poor chap.

Tyres should be wide enough to maintain a grip but not as wide and rough as mountain bike tyres which adhere well, but add rolling resistance and slow the tourist cycler down.

These are the dimensions of my inner tubes. We bought two with us. Heavy but worth it. 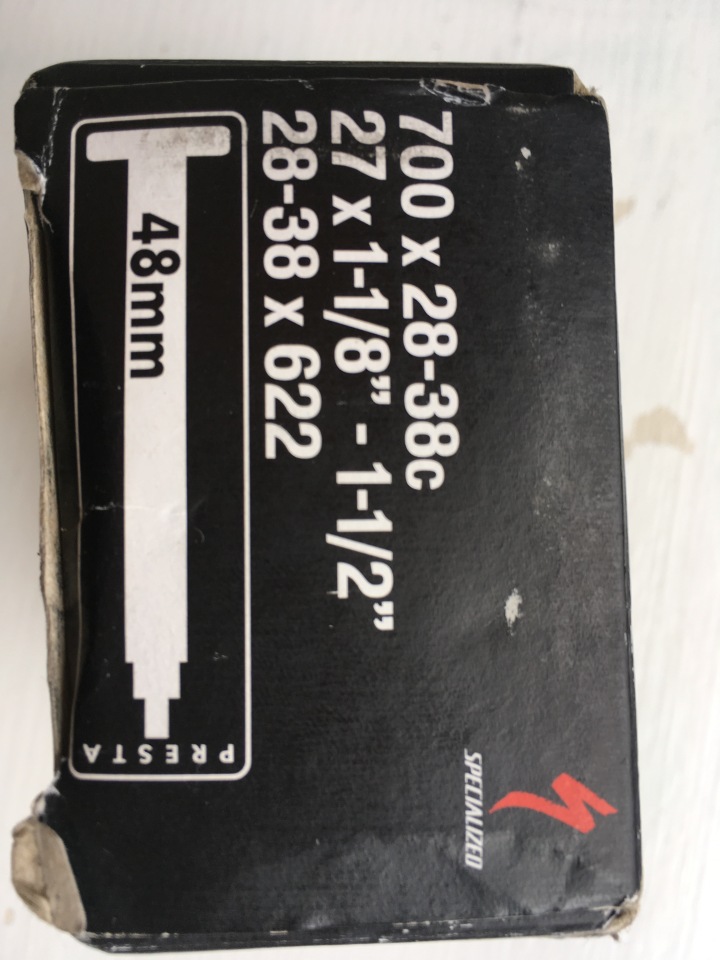 On to the cycling. By twelve midday we had been along Loch Lomond, Loch Long and Loch Fyne, where we visited the oyster bar and had…. tea and cake.

A white knuckle ride for me as we climbed narrow mountain roads, in rain and low cloud, with strong gusts of wind and heavy traffic passing close by. I just could not stay on my bike – not heavy or fast enough I guess. I was pretty scared, tbh.

Keith was today’s knight of the road on the ride from the ‘rest and be thankful pass’, which tells you something in itself, as he rode behind me, meaning the trucks pulled out behind him and gave me a wider berth. I’m eternally grateful and managed to enjoy the day.

The winds at Loch Fyne were so strong we saw a heron hovering – never seen that before. Then it came to rest in the shade of a tree.

It looked different to normal Shropshire herons and we saw a much darker one later in the day too.

The weather is much colder: down from the 30degree temps of last week to a max of 13 at Loch Fyne yesterday: 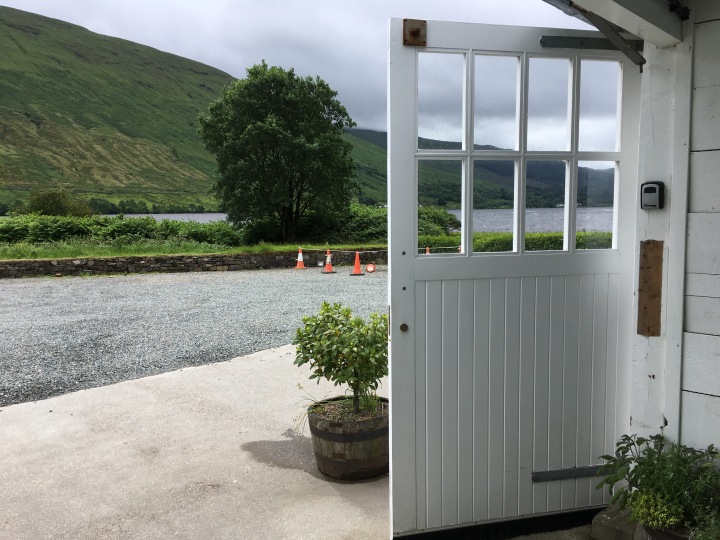 Actually not a great photo sorry. Difficult to tell from the iPhone.

On to Inveraray – picturesque from the distance with an array of white buildings along the shore line. A bit touristy when we got there with piped bagpipe music throughout.  The sheer volume of water which comes from the mountains to the Loch can be imagined by weighing up the dimensions of the bridge on the way into town – double arches – wide and high.

There was a puffer boat,  as seen in Whisky Galore, in the harbour. 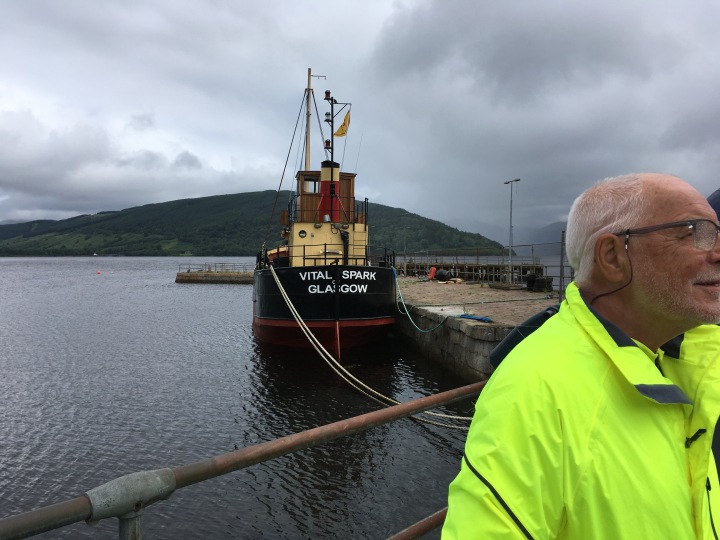 From Inveraray a seven mile hill climb (which we managed with relative ease! We are getting better at this) to eventually descend to Loch Awe  and a church, Conan’s Kirk, built in 1905 by a chap for his mother, who thought it too far to walk to the village church. 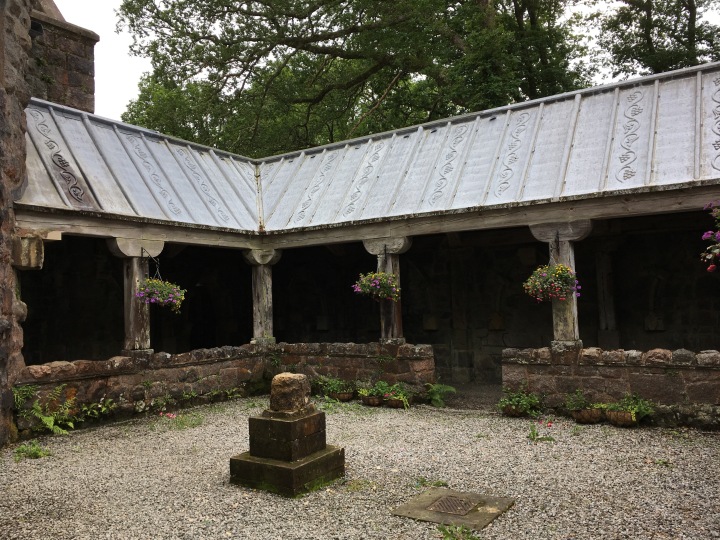 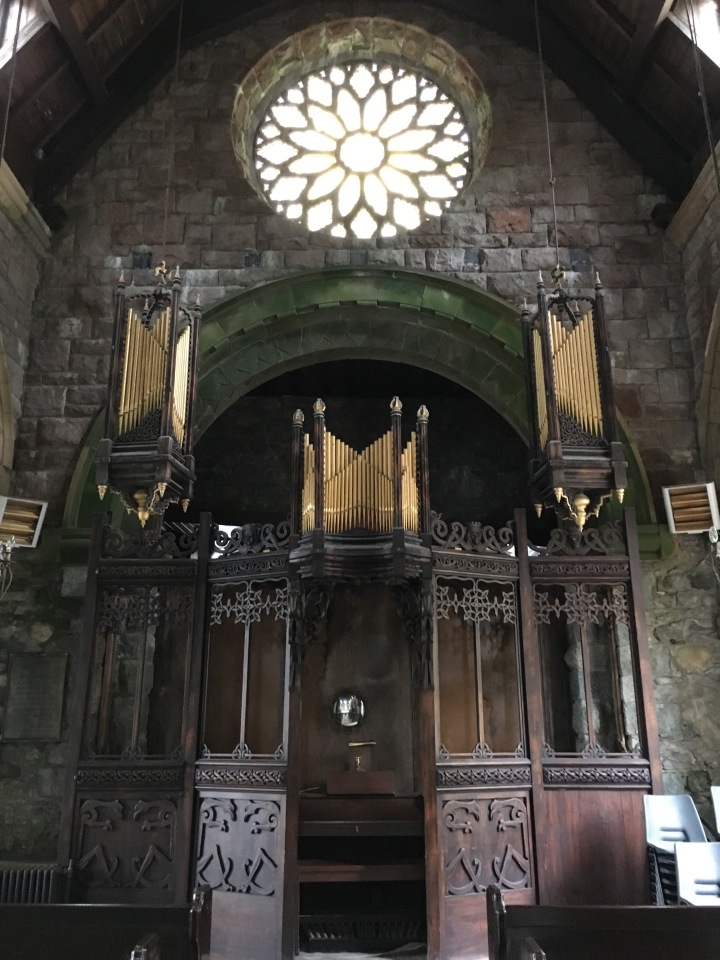 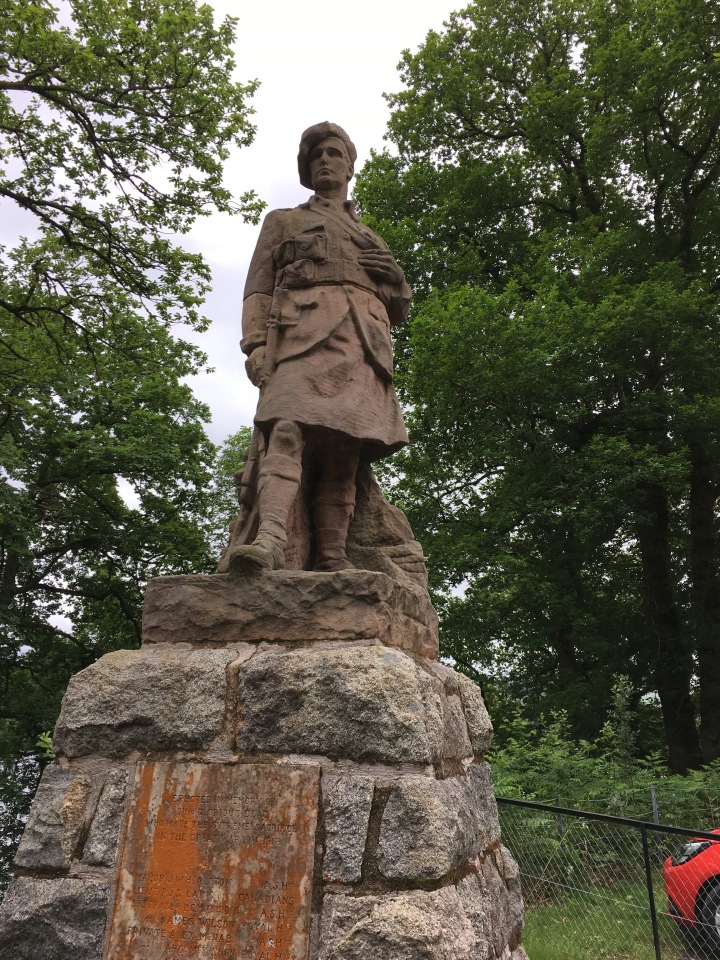 Here in sheltered spots there are drifts of ragged Robin, and, everywhere that’s damp, yellow ‘flags’ or irises. I saw my first kestrel hovering today. Odd because they are a regular feature of motorway driving on the way to Scotland.

Watched a mouse in grass and a sparrow chasing a feather. ‘What is this life, if full of care/ We have no time to stand and stare…’ (Philip Davis poem)

And finally, The Tainauilt Hotel – in The Michelin Guide with good reason. The most beautiful meal I’ve ever eaten.

And they let us Book breakfast in advance to allow an early getaway. ..