Hurst Green, Lancashire to Dent, Cumbria by way of Yorkshire.

We have turn by turn paper instructions. Most days they number about four pages. On particularly long or complex days (going round Bristol for example) there may be five. Today we had two sheets that contained the word climb and steep far too frequently for me. Far too frequently. Gates and sheep were other common words. You get the picture.

A pleasant start In Hurst Bridge. Lovely vegetarian breakfast in a room shared with three Portuguese young people who had attended a wedding locally the previous night. We heard the revellers returning, and were very glad the publican had decided to lock out bikes away more securely than usual. Apparently it is not unknown for such guests to appropriate the bikes and take them for a jaunt down the hill. 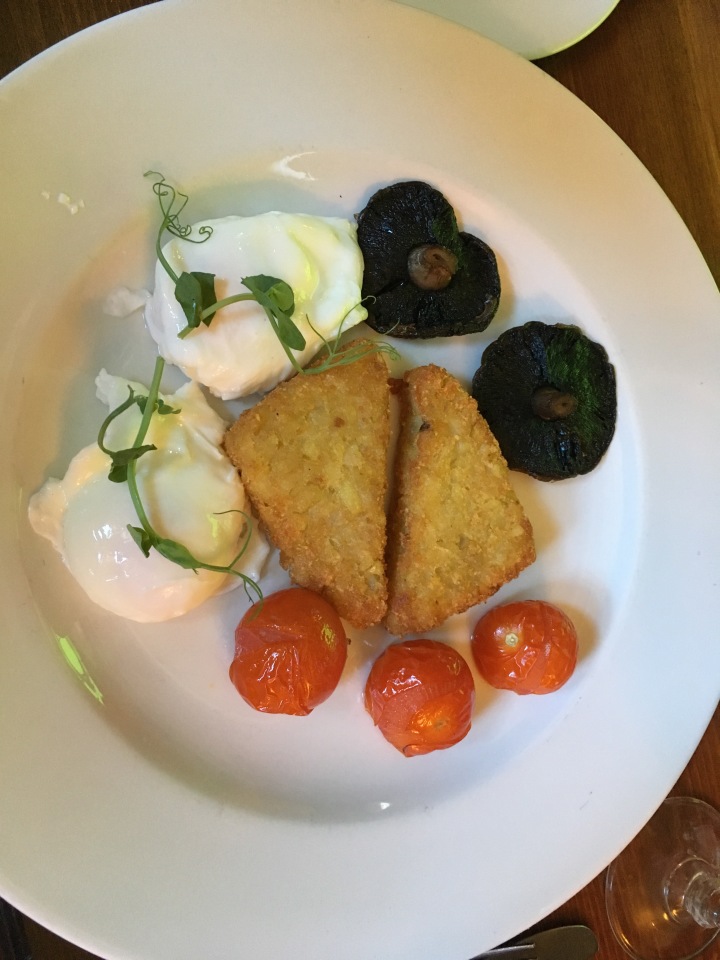 We knew today would be tough. You don’t get a low mileage like 39.5 without a large ascent. This was 4600 ‘. Fifty percent greater than even Dartmoor. Today was like Dartmoor on steroids.

Time for some technical stuff. Shoes. With these distances it’s worth getting some cycling shoes. They support the feet, particularly the arches. They should be large as the feet swell during cycling. I normally take a 38. The cycling shoes are 41. They do make climbing gates hard though! 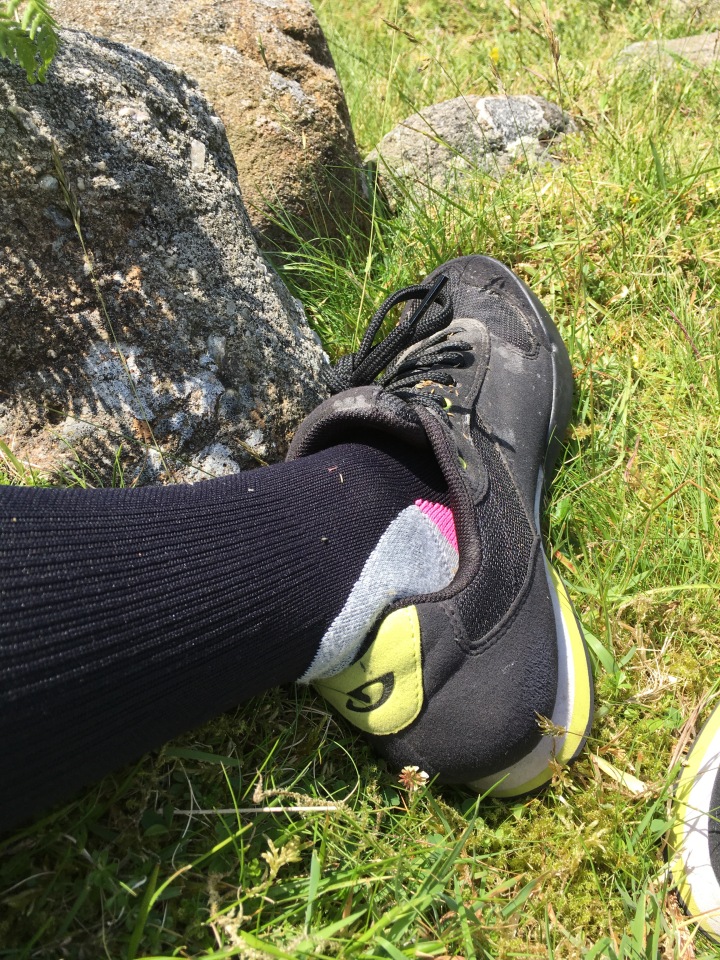 Keith has toe clips on his pedals so has straightforward firm soled shoes. I have a cleat on mine so have a similar pair of shoes with a metal fixture on the bottom of the shoe that interlocks with the pedal, a so-called SPD arrangement (which once made me fall off so now I’m too scared to use it) Both of us can walk coMffortably in our shoes, we travelled down in these and wear them out for dinner. Those whippets we mentioned yesterday have virtually nothing as a pedal and a thumping great lump of metal on their shoe which makes them walk most strangely, with their toes in the air, a kind of reverse Mr Tumnus from the lion the witch and the wardrobe.

Today we inadvertently got involved in an ‘epic cycle race’ of 100 miles around the Trough of Bowland. Hundreds of string thinpeople, and some less so, flashed past us. Then came the slower ones, and finally one who could not do the  climb. Poor chap. It’s bad enough walking up 17% gradients in normal shoes, never mind elite cycling ones. He was actually slower than us.

The Forest of Bowland has very few trees.   And very few hills. A massive one on the way in, and a more massive on the way out. So two in total. We climbed them both. 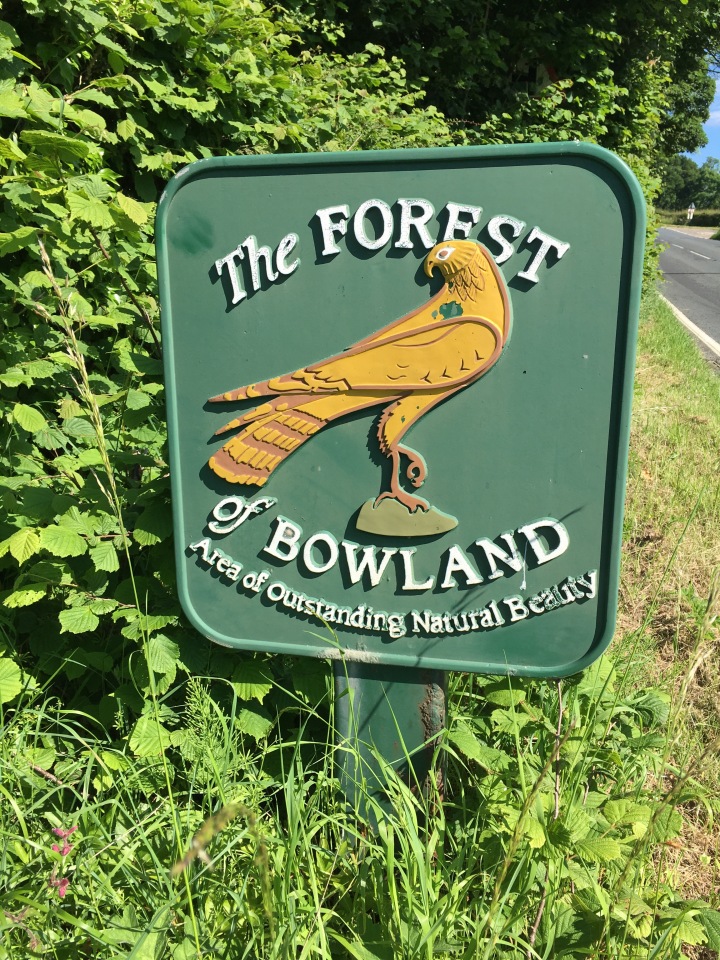 As well as the cyclists, the road was frequented by large groups of motor bikers. These leather clad men mountains show great dexterity. I admired the way they negotiated the hills and  bends, and felt quite safe sharing the road with them.

Until we reached the pub in slaidburn and found them drinking beer! At 11.30!!! 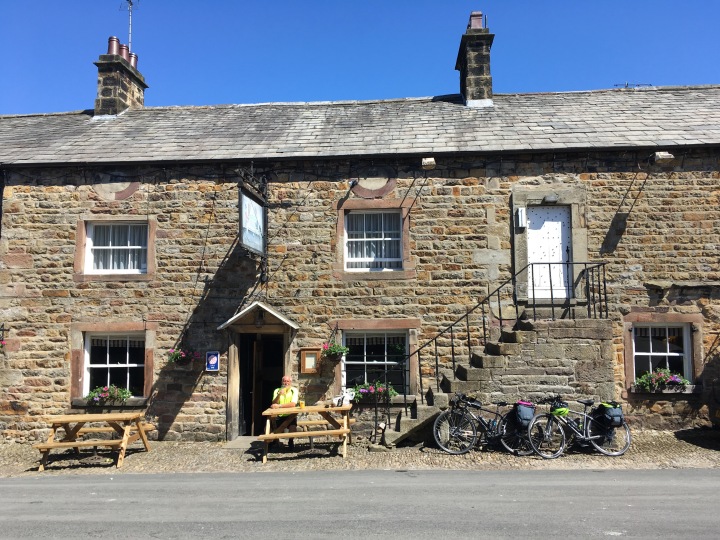 Slaidburn was delightful. It felt French in the hot summer sun. And looked French with its church by the river, across a hay meadow. Is this a Norman tower? 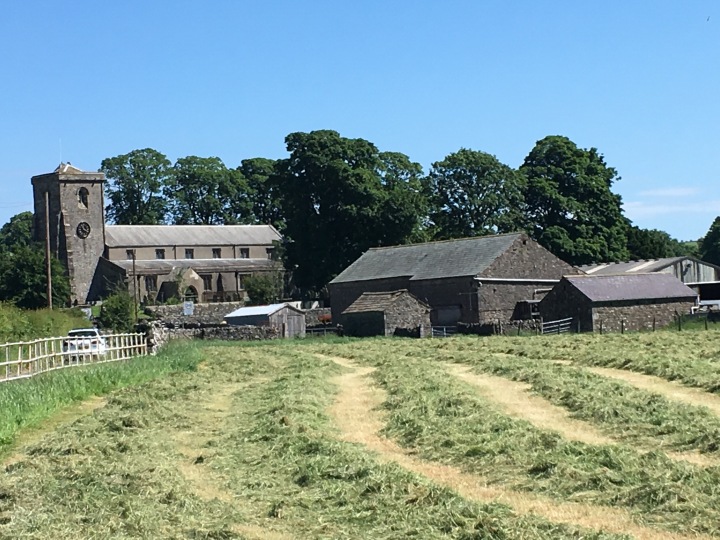 The day’s instructions were so short because it was basically  climb  over three huge hills. And be scared, very scared by the descents.

Seeing there was little in the way of development over the middle of the day we bought sandwiches and ate an idyllic lunch by this river, with our ‘smalls’tied to the fence behind, hoping they would dry. 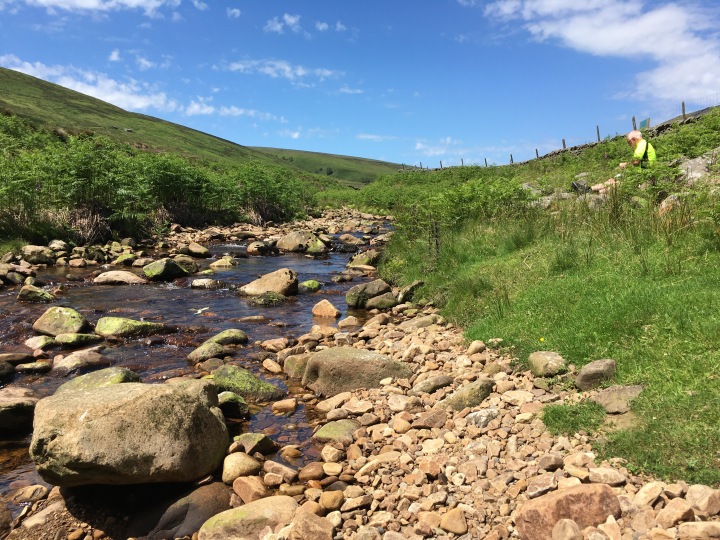 It was particularly lovely to see a ? Sunday school group wade down the river with buckets and  fishing nets too. 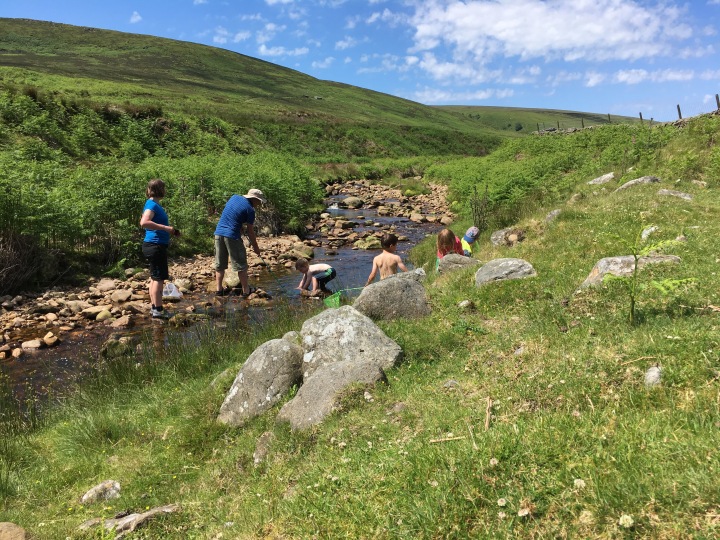 Then onward and upward. Again. Here a picture from either side at the top. 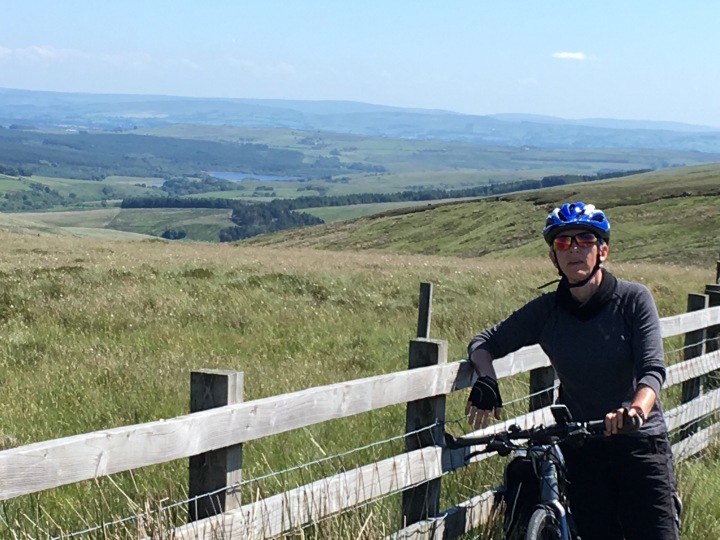 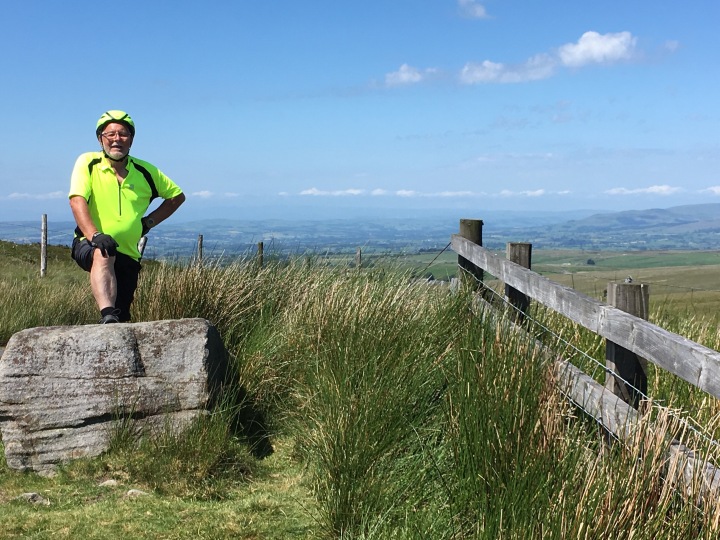 From here we could see three massive outcrops to our right. As we headed down to Ingleton we were glad that we didn’t have to climb any of these but we did. The third hill steeper than either of the previous two but ringing with the bubbling call of the curlew, the pipe of the lapwing, a cuckoo calling, linnets and larks singing, and very few people. We saw Heath orchids and smelt warm gorse, and in the sheltered valley, warm pine. The views were spectacular. And then down to Dent. One of the areas flooded in Cumbria, but today old fashioned, tidy, pleasant and baking hot.  View from above. 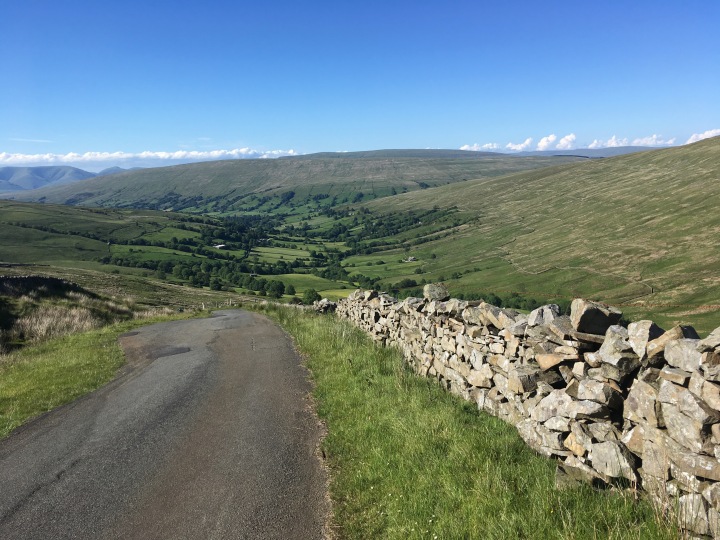 And in the street this evening. 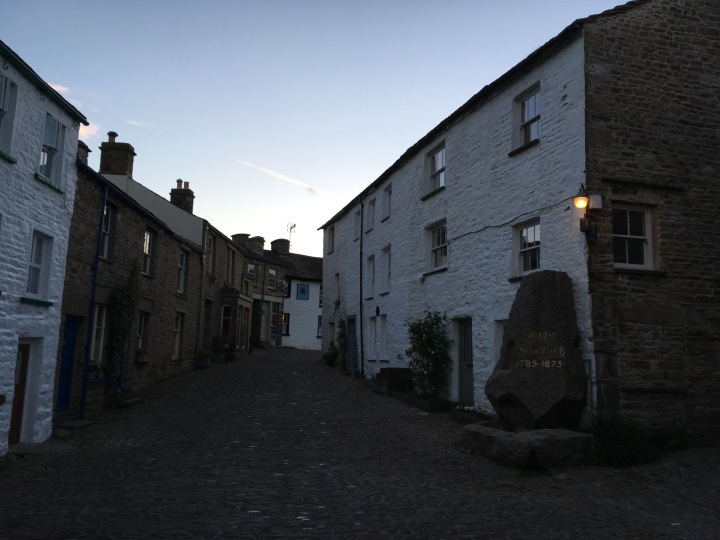 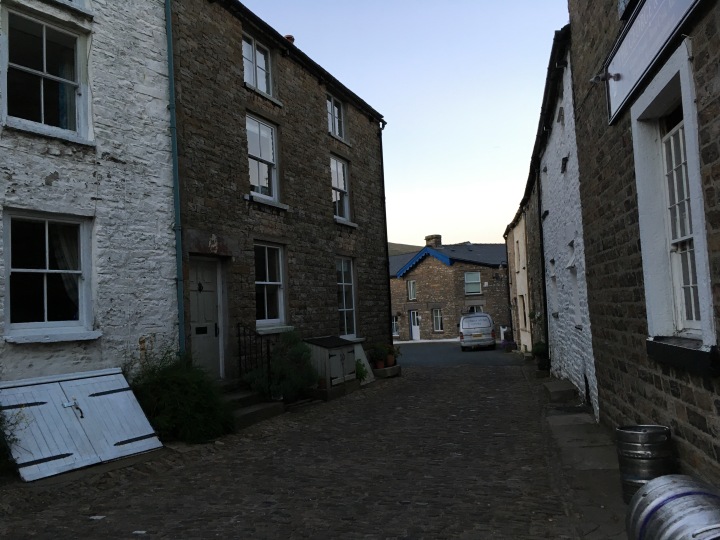 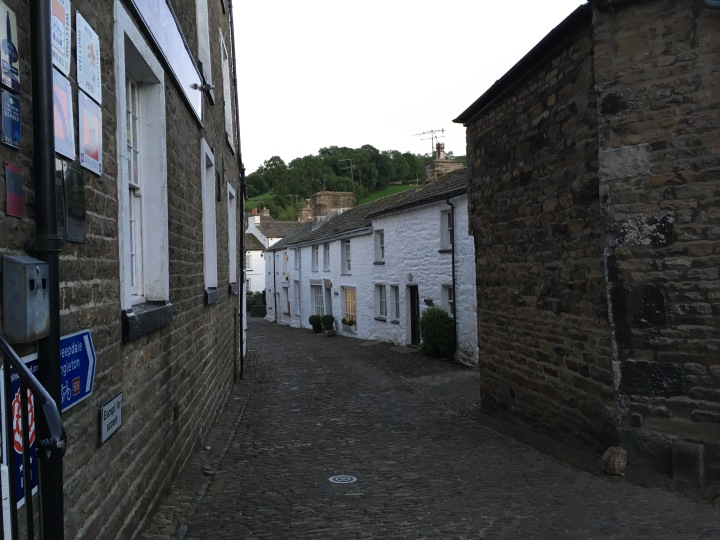 Tomorrow 55 miles or so.

Tantrums: hmmm nothing too major.

Forget the book for now.