The country feels empty other than birdsong, occasional tractors cutting hay, and the odd bark of farm dog.

Main flowers today: in the wild, red valerian and in gardens (many and beautiful) sissyrinchium and peonies.

The cycling today has been long and hot, very hot. Keith became weak and wobbly, but perked up no end with the addition of five small packets of salt to his lunchtime oj and lemonade. It’s just physics, Keith.

Rather incredibly it seems to me now, as we sit in our rather lovely and ancient B and B (which surprisingly features a four poster bed!) we have cycled well over 50 miles in intense heat from the lovely town of Chepstow, famed for castle and bridge, along the Wye Valley, through Monmouth, and across Herefordshire to Weobley, an ancient small town with a wealth of political history. 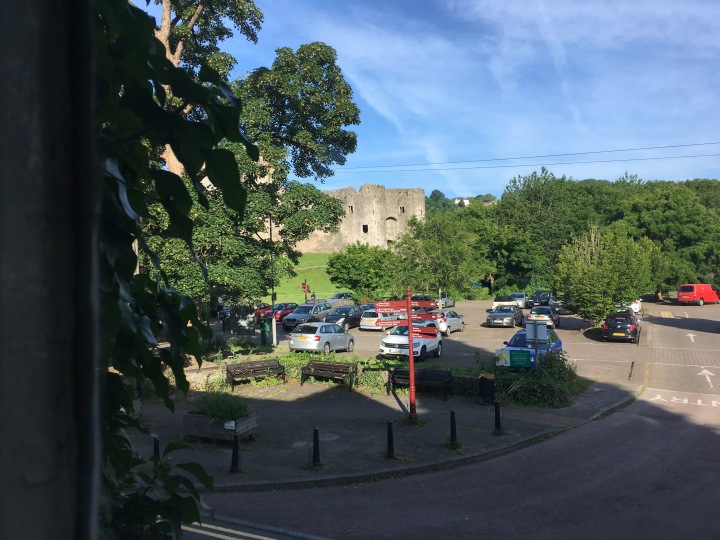 But with the travelling comes thoughts: who knew that King Henry V was born in Monmouth? That prompts me to want to read and understand Shakespeare’s play – and also to get to grips with the history of England. Is there yet time? also Charles Rolls was associated with Monmouth.

But Monmouth is also a modern town, adapting old facilities for new uses:

or not…….a good idea which has somehow gone wrong.

The defib now lives in the pub, which has limited opening hours.

Whilst here we met a couple from Holland also doing lejog. The lady of the pair was struggling with the distances. She had four panniers, one containing a rather solid leather handbag. Bad plan. And of course there aren’t many hills in the Netherlands. Never mind they had youth on their side.

What was interesting though was that they waited in London last Friday for six and a half hours waiting for a trAin with space for their bikes, finally arriving in Penzance at 23.30. 😦 not fun. And then it rained.

So maybe our courier plan wasn’t so silly.

Other practical points : washing on the road. ‘ I rinsed my smalls’ as so many older ladies have said to me over the years. I did more than rinse them, dear reAder, anything less would be antisocial in the extreme. As they weren’t completely dry this morning I fixed them to the rack for our journey, allowing them to dry in the breeze, arranging them artfully on the bike when we stopped for morning breAk: 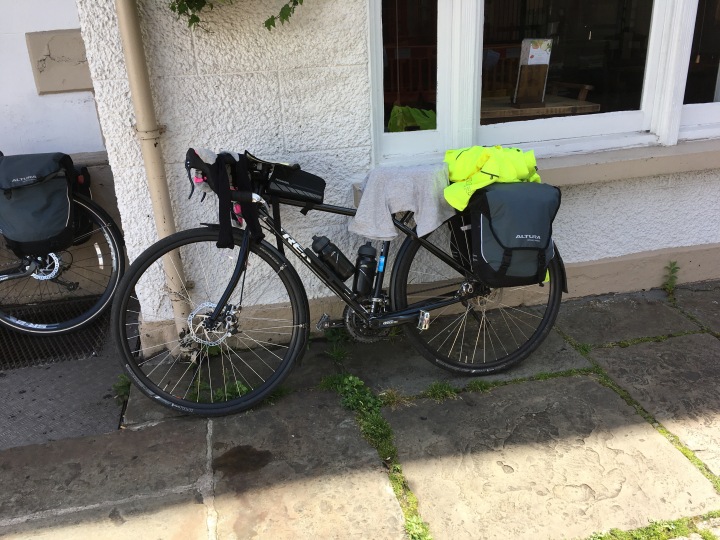 socks artfully dangling from handlebars, ‘ knickers’ (ungainly padded cycling underwear ) artlessly on the seat. And all packed firmly away for the next leg of the trip. But not firmly enough   I hope that when the undies flew off the pannier,somewhere along the wye valley,  they did not hit anyone on the head or windscreen.

Remind me to talk brakes soon. But now for bed- 59.5 miles tomorrow!

Tonight’s accommodation after an excellent pea/spinach/cashew nut pilaff at The Salutation, selected Because of high protein and iron content. We’re so serious!

Tantrums: 0 (but some serious despondency prior to salt boost)

Pints: 1 (maybe the two yesterday was one too many)